Beekeeping a source of income for Tekirdağ women 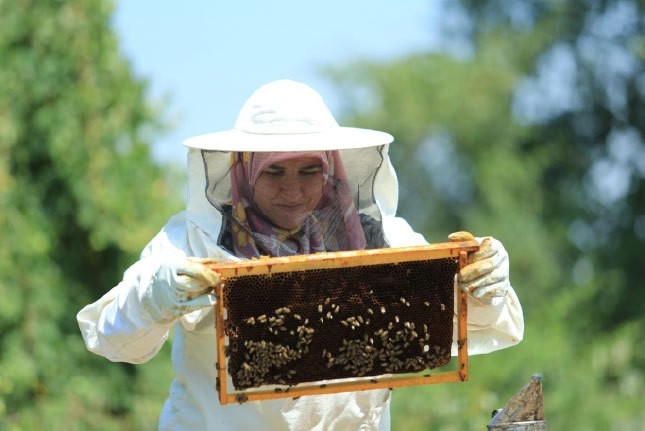 Supported by the municipality, women in Tekirdağ tend to engage in beekeeping both as a hobby to pass the time and as a contribution to their family

Local women in Tekirdağ began learning apiculture as a hobby as part of the Tekirdağ Metropolitan Municipality's Apiculture Development and Pollination Project, and now they contribute to their family incomes by selling the honey they produce.

Tekirdağ Metropolitan Municipality Mayor Kadir Albayrak told Anadolu Agency (AA) that they initiated the project about two years ago and plan to distribute 50,000 beehives to beekeepers in the province. Explaining that apiculture is an important economic activity for the province, Albayrak said: "There are roughly 50,000 beehives in Tekirdağ currently. We aim to distribute 50,000 more beehives to the local beekeepers in the next five years to support and develop apiculture in Tekirdağ."

Albayrak said that women who maintain hives also benefit from the municipality's support. "Our main objective is to increase the number of beehives to 100,000 in Tekirdağ. We distributed 11,000 beehives in the last two years. A total of 1,500 beekeepers, including 50 entrepreneurial women have already been supported by our municipality. We encourage people to produce honey and be involved in apiculture in our province," he said.

Mine Sarı, who is a beekeeper from Tekirdağ's Malkara district, said she has been interested in apiculture since her childhood. Sarı said she began producing honey with five beehives. "I took on apiculture as a hobby and to contribute to my family income. Then I signed up for apiculture courses. When I heard that the Tekirdağ Metropolitan Municipality was supporting apiculture, I immediately applied to be a part of the project. We received 13 beehives so far and we plan to increase the number to 30 by next year."

Beekeeper Hacer Yılmaz, who lives in the İbribey neighborhood, said that her husband is a farmer and she began beekeeping with his support. Yılmaz also said that she took on apiculture as a way to contribute financially, adding that her husband works extremely hard to support their family. "We participated in the Tekirdağ Metropolitan Municipality's project and received 16 beehives. Currently, we have 40 hives. My husband was helping in the beginning, but now I can manage all the hives by myself," Yılmaz said, adding that this year has been fruitful in terms of production and they have already met their goal with this year's honey production.

Banu Türkoğlu explained that she is a housewife, but became an amateur beekeeper with 10 beehives to contribute to the family income. She said that the number of her beehives has increased thanks to support from the municipality's project. Türkoğlu said: "I want to support my family financially. The amount of honey I produce may seem small, but our sales are very good. My husband is a shopkeeper and we have a 15-year-old daughter who goes to school. I try to support them by making honey." Türkoğlu admitted that she is sometimes afraid of the bees but stressed that she likes taking care of them. "I look after the bees instead of sitting at home. I earn money while being relieved of stress. Usually, housewives get together with their friends during the day, but I choose bees over my friends. Apiculture is a nice occupation."
RELATED TOPICS