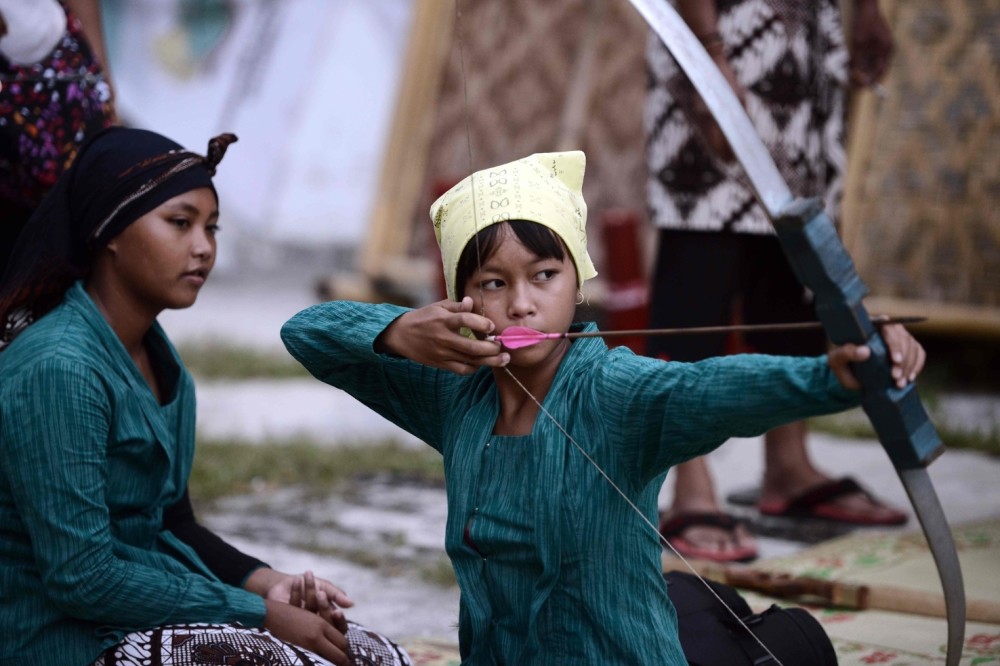 After decades of decline, a revival is under way as a new generation of enthusiasts pick up bows and arrows for the first time, and elderly archers seek to pass their skills down to youngsters before they are lost forever.
by Aug 17, 2016 12:00 am
Sitting cross-legged, 68-year-old Supadmi fires an arrow across a field into a small stick target and sets a bell ringing, taking the lead in the game - an ancient form of Indonesian archery.

She was among sportsmen and women in colorful headdresses and sarongs who sent hundreds of arrows flying through the sky in unison at a recent tournament, in a festive atmosphere with blaring trumpets and tinkling percussion music.

This local archery known as "jemparingan" has been played for centuries around the ancient kingdom of Yogyakarta, Java island's cultural heartland where Buddhist and Hindu temples sit amid bottle-green paddy fields.

After decades of decline, a revival is under way as a new generation of enthusiasts pick up bows and arrows for the first time, and elderly archers seek to pass their skills down to youngsters before they are lost forever.

Turkish people have also been showing rising interest to traditional archery. Throughout history, Turkish archers were known for their ability to turn their back and shoot their arrows while they rode their horses. Archery also held a great importance in the social life of the Turks next to warfare and hunting. For instance, archery competitions used to take place during national holidays, religious ceremonies and weddings.

"This sport is training for our character because we need to attain inner peace before we fire off the arrows," said 68-year-old Supadmi, who like many Indonesians goes by one name, explaining how the spiritual, ancient sport is seen as a workout for the soul as much as the body.

The love of archery has carried through to the modern era and it is one of the few disciplines where Indonesia has excelled in international competition - the country won its first ever Olympic medal in archery, a silver, at the Seoul Games in 1988.

But the popularity of jemparingan itself has been waning - it almost disappeared entirely in the 1990s after the death of one of its biggest backers, a Javanese nobleman named Duke Paku Alam VIII.

Now there signs that its fortunes may be picking up again. A large number of archers, 140, took part at the recent Yogyakarta tournament, which was also attend by legions of spectators.

At the palace of the sultan in Yogyakarta, a new jemparingan group was formed two years ago that plays in the original royal style and usually meets every week.

Meanwhile in 2012 a new club was set up by archers in the city and nearby Solo, and the government has begun allocating funds to support the rejuvenation.

"The young generation is now our main target and the message we want to get across is that archery is a cool sport," said Agung Sumedi from Langenastro jemparingan club, which recently began training children under 10 years old.

Still, sparking a mass revival will be an uphill battle.

As recently as the 1990s, every region around Yogyakarta had its own jemparingan tournament, and competitive play would culminate every year with a major competition at a palace to win the Duke's cup, according to veteran local archer Rahmat Sulistyawan.

He still holds the cup he won in the last such major regional tournament in 2000, when he was just 15, and other local athletes lament that many veteran players long ago abandoned jemparingan.

Jemparingan was originally played only by members of Yogyakarta's royal family and others considered noble in the complex hierarchy of Javanese society, before it later became a sport for everyone.

Unlike modern archery, it is played with all the archers sitting in a row cross-legged. Instead of aiming at a circular target with a bulls-eye, archers fire their arrows at a stick made of sponge and hay wrapped in cloth measuring 33 centimeters that represents a person.

The top section is red and is supposed to be the head, the part below is yellow, representing the neck, and the rest is white, for the body.

An archer gets most points for hitting the head. When the arrow hits the tiny target, a bell rings to inform the archer - who is sitting 30 meters away - of his success.

Jemparingan is not just physical exercise, however, but also a workout for the soul. In its most traditional form, the string is drawn down to the chest instead of to the tip of the mouth like in the modern style, a method that is meant to exercise calm and concentration.

Loading, aiming and firing the arrow requires concentration and patience, and the sport teaches people about hard work and to focus on goals instead of enemies, according to its proponents.

At the recent tournament, Supadmi emerged the victor in the women's singles category, picking up a trophy, 500,000 rupiah ($38) and a live chicken, which was a bonus prize for three on-target shots in a row.

And despite her age, she is determined to join in the revival and plans to teach two of her grandchildren jemparingan.

"We must keep this sport alive," she said.
RELATED TOPICS