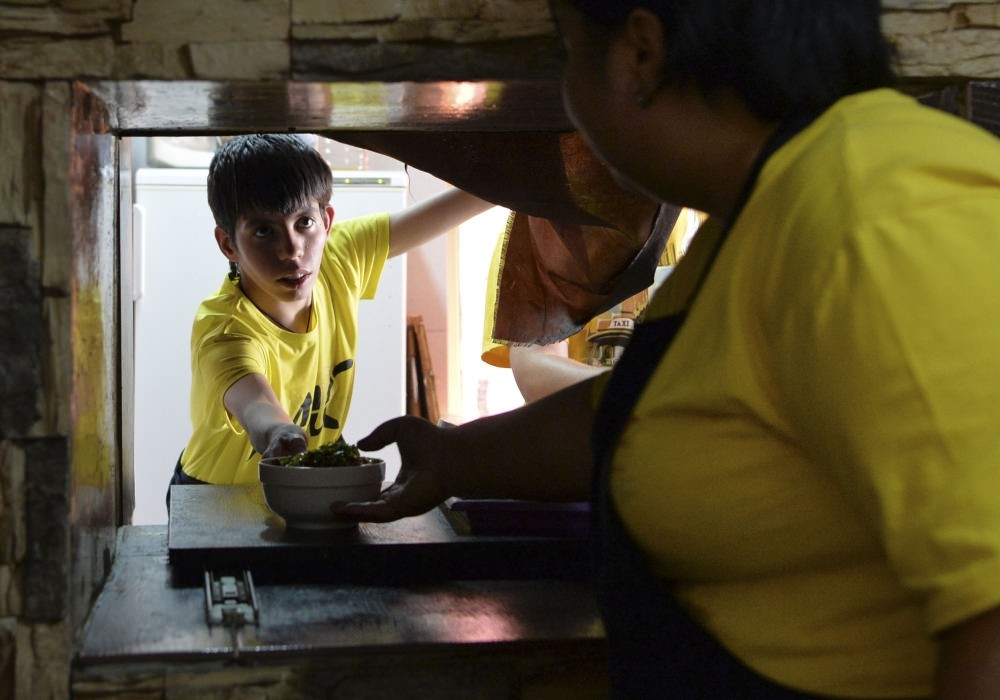 by Sep 03, 2016 12:00 am
With its simple menu and casual atmosphere, the Training Cafe looks like many other local eateries in Kazakhstan's largest city, Almaty.But unlike the others, its 40-person staff consists exclusively of patients from local psychiatric institutions.The novel initiative aims to fight the stigma that surrounds people with disabilities in the ex-Soviet Central Asian state and to improve their access to the labor market.

"I have learned a lot working here," said a shy 26-year-old waitress named Zhuldyz Abdykarimova during a lunchtime rush.She has spent her adult life in a local mental institution for a learning disability. And like her fellow workers with either learning disabilities or mental illness had little hope of finding employment until she landed the job at the cafe.

Despite recent government efforts to improve living conditions for the disabled, Kazakhstan is still struggling to shed Soviet-era attitudes about their ability to function in society.In the Soviet period, people suffering from minor cognitive disabilities were often sent to mental institutions, while those with more severe illnesses were sometimes incarcerated in high-security facilities.

"You practically never saw anyone in a wheelchair on the street in those days," said Asiya Akhtanova, who heads the Almaty-based Association of Parents of Disabled Children, which was founded during the collapse of the Soviet Union.Akhtanova said, "The idea that these people could work, attend ordinary schools and even obtain some form of higher education never entered anyone's mind."

Experts say that more than 700 psychiatric patients - many of whom present no danger to the public and are capable of working -remain living in institutions in Almaty, a city of 1.5 million in southeastern Kazakhstan.

Government data shows that only three percent of disabled people in the country are employed.

In all, some 200,000 people are on a state registry of those with chronic mental health disorders in this country of 17 million, local media reported this year.

The eatery, which serves traditional Kazakh and Russian dishes, receives financial support from the New York-based Open Society Foundations founded by American millionaire George Soros.In a sign of support for the initiative, Kazakh Health Minister Tamara Duseynova dropped in for a quick bite in November.

Kazakhstan last year ratified the U.N. Convention on the Rights of Persons with Disabilities, and there have been small signs of change in public attitudes, especially in the vast country's larger cities.

In 2014, a film director from Almaty produced Kazakhstan's first movie starring a disabled person, an adaptation of Shakespeare's "Hamlet" that starred actors with cerebral palsy.

The government's vigorous promotion of Paralympic sports during its bid to host the 2022 Winter Olympics, which it ultimately lost to Beijing, saw people with disabilities propelled to the center of public attention.

In February, the government announced that more than 4,400 people with disabilities had been integrated into the workforce last year.

But Seisenova, who says she fears for the future of her 20-year-old mentally disabled son, deplored that the Training Cafe is the only initiative of its kind in her city.

"How many capable people still spend their days inside the walls of these mental institutions?" she asked.

Calls for more projects like the Training Cafe have resonated with one of its founders, psychologist Rasima Temerbayeva. She says there are plans to open affiliates in other Kazakh cities as well as in the neighboring countries of Kyrgyzstan, Tajikistan and Uzbekistan.

"In Kazakhstan, people with disabilities are forced to exist within tight boundaries," she said as waitress Abdykarimova totaled up the bill, adding,"And this a place where those boundaries don't exist."
RELATED TOPICS