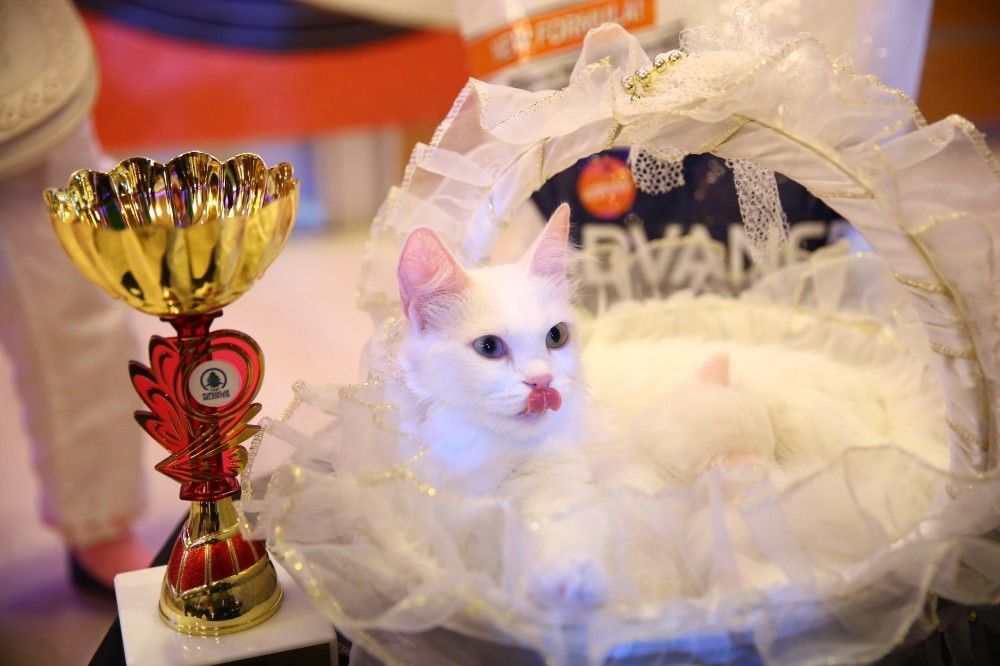 by Daily Sabah with DHA Sep 06, 2016 12:00 am
A white puffy Turkish angora, a specific breed of cat, was the star of a recent international cat festival and claimed first place among 50 other cat contestants. Owned by Derya Baykal, the cat Pamuk ("Cotton" in English) won TL 7,500 ($2,500) worth of cat food, along with another monetary prize. Organized in Ankara by the Pursaklar Municipality, the cat beauty contest's other top two cats were Adva, owned by Ayşe Korkmaz, and ICE-Ays, owned by İrem Haytal, coming second and third, respectively. The jury committee assessed the participating cats based on their fur, tail shape and general condition as well as behavior.

Pursaklar Mayor Selçuk Çetin said that the annual competition aims to preserve Turkish Angora cats and promote them internationally. Among the 50 cats, some came from Azerbaijan, Ukraine, Russia, Kyrgyzstan, Kazakhstan, Turkmenistan and Bulgaria.

The contest's award ceremony took place on Sunday evening at the Abdurrahim Karakoç Culture and Congress Center. All the cats were gifted food by Advance and Pet Garden firms. The event was supported by the Foreign Affairs Ministry and the Culture and Tourism Ministry.

According to the International Cat Association, this elegant cat comes from Ankara (formerly Angora), where several other animals with silky coats originate. They are also a highly energetic breed and are fun to play with.
RELATED TOPICS