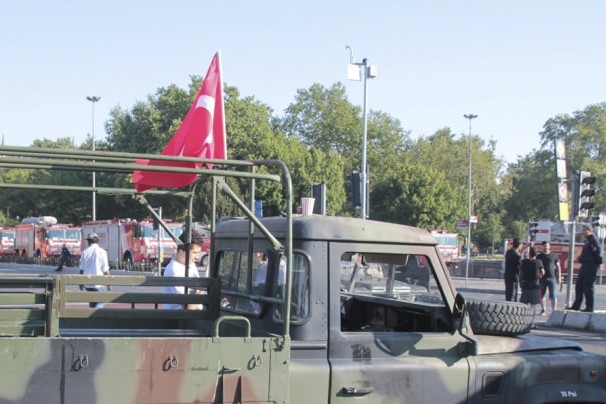 by Daily Sabah Oct 06, 2016 12:00 am
Organized by Istanbul's Zeytinburnu Municipality as the opening exhibition of the season, "Respect to July 15/Sovereignty of the Nation," will open tomorrow.

According to information compiled by Anadolu Agency (AA), the exhibition, which was gathered from the collections of Özlem and Haluk Perk, will stay open until Nov. 15 at the Zeytinburnu Culture and Arts Center.

Curated by Mehmet Lüfti Şen, the exhibition will use thousands of goods featuring the star and crescent that were used by civilians and by the state in the Ottoman Empire as well as in the Republican era such as Turkish flags, diplomas, identity cards, jerseys of the Turkish national football team, posters, notebook covers, passports, book covers, matches, magazines, chandeliers, inkpad and pencil boxes, belt buckles, mirrors, dowry chest, blinkers, holy script protectors, Turkish bath tools, necklaces and stamps. During the opening of the new season as well as during "Respect to July 15/Sovereignty of the Nation" exhibition, the music band "Yansımalar Grubu" will give a live performance.
Last Update: Oct 06, 2016 1:01 am
RELATED TOPICS