Hundreds of int'l sportsmen to run along fairy chimneys 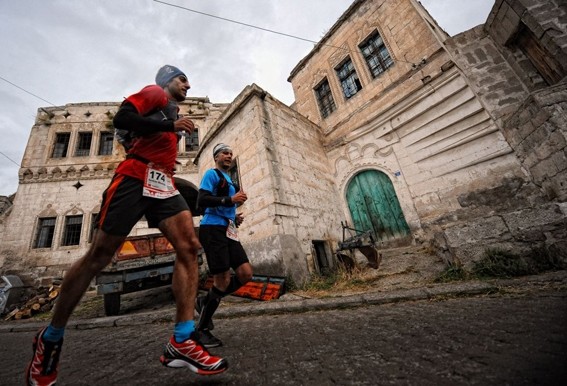 by Daily Sabah with DHA Oct 07, 2016 12:00 am
Including 110+ km, 60+ km and 30+ km runs, the Salomon Cappadocia Ultra Trail is expected to bring 1,100 sports people from 51 countries between the ages 18 and 85 together on Oct. 22 and 23. The competitions, which will begin at the narrow trails at the first light of day and continue throughout the night are characterized as a sports, adventure and durability event.

To be a part of the competitions, which have attracted a high level of participation from France, Italy, the U.K., Germany and the U.S., roughly 1,000 sportsmen, including 450 international sportsmen from six continents, will convene in Cappadocia. A total of 320 women and 780 men will sweat during the competitions. Among the sportsmen, the most experienced runner this year is 85-year-old Rene Bachelard. The world's most famous trail runner and one of the masterminds of Ultra-Trail du Mont-Blanc, the French sportsman will run in Turkey for the first time. Aside from the Salomon Turkey team, numerous athletes including Amy Sproston, Ford Smith and Dreama Walton from the U.S., Anna Marie Watson from the U.K. and Elena Polyakova from Russia will compete in the 110 km run. Since the event was featured in the international media, it is expected to draw worldwide attention and become a part of the world trail run calendar in the near future.

This will be an ultra-trail run that takes places along the hills and valleys of the unique Cappadocia region, a UNESCO world heritage site. The distance is about 114 kilometers with a variation in altitude of 3,340 meters. The running event is expected to be included in the "Ultra Trail World Tour" calendar and announced as one of the world's most suitable areas for ultra-trail runs.

The race starts on Oct. 22 at 7 a.m. in Ürgüp city center. Participants should finish the route in 24 hours and they should carry equipment necessary to ensure the safety of their run in possible weather conditions.
RELATED TOPICS