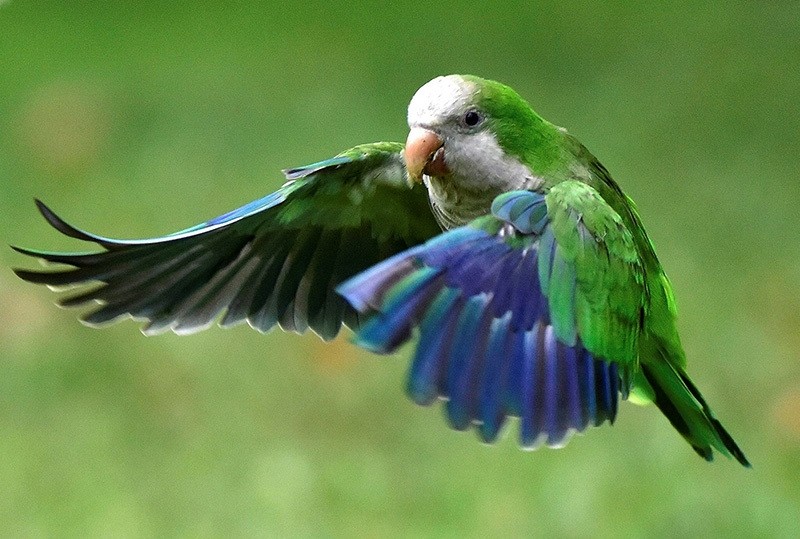 They may be cute, colorful and chatty, but South American quaker parrots have taken up residence in Madrid and other Spanish cities, irritating residents with their shrill squawks and destabilising the ecosystem.

The small, bright green and grey-breasted birds - also known as monk parakeets -first arrived in Spain in cages as entertaining pets, but some either escaped or were let loose, getting their first taste of freedom in the green, leafy Spanish capital - and then proliferating.

Maria Moreno, who lives in the Los Carmenes district in southwestern Madrid, said she first noticed them several years ago.

A pair of parrots chose the area as their home, and enjoyed it so much that there are now a dozen parakeets who fight among themselves and compete for food with pigeons, sparrows and magpies.

"The noise and mess they make is awful," she says, adding "and they urinate on cars," as she watches the parrots fly to and from trees along her road.

Some districts of Madrid, as well as parks such as Casa de Campo or the Retiro, are full of the birds which originate from Argentina, Brazil, Paraguay, Uruguay and Bolivia.

They build communal nests that weigh up to 50 kilos (110 pounds), mostly in trees - they favour cedars - but also in electric pylons.

In order to do so, the parrots tear thousands of branches off trees, at times leaving them nearly bare.

"It causes a significant deterioration in the health of the tree, and some dry up," says Blas Molina, an expert at the Spanish Ornithological Society (SEO/Birdlife).

According to research by the society, there were around 20,000 quaker parrots - called so for their bobbing and shaking - in Spain last year, many of them in Madrid, Barcelona and Malaga on the southeast coast.

Other European countries such as Britain have also seen an influx of monk parakeets.

Paris, Rome and London meanwhile have large colonies of ring-necked parakeets, which come from Asia and Africa and are also deemed aggressive towards other birds.

Jose Luis Postigo, a researcher at the University of Malaga and an expert on quaker parrots, about which he is writing a thesis, says the species is "very adaptable."

It can live in a warm country like Spain, as well as in the colder climes of Brussels or Chicago, adapting by building thicker nest walls.

Classified as an invasive species, Spanish authorities are allowed to take measures to cull them, and in 2011 sales of the bird were banned in the country.

Molina says that in order to counter the large number of parrots, authorities have in the past cut branches and destroyed nests where they found colonies.

But he adds that they ignored the parrots themselves, "which means that what they actually did was move them to other zones."

Salvador Florido, head of environmental health surveillance at Malaga's city hall, said that with the arrival of quaker parrots, there were now "fewer varieties (of birds) due to competition for food."

In Madrid, where more than 5,000 monk parakeets live, authorities are working with SEO/Birdlife to find out where the colonies are.

Exactly what they will do, though, remains a mystery.

The SEO won't explicitly recommend culling the birds - a drastic move that does not sit well with animal rights groups, even if it is legal given quaker parrots have been classified as an invasive species.

Madrid city hall is also staying mum on what it plans to do.

But it at least has information from the experience of other towns, such as Zaragoza in northeastern Spain.

There, authorities managed to bring down the number of adult birds from more than 1,400 to just around a dozen.

Luis Manso, head of environmental conservation in Zaragoza, said one of the methods used was piercing eggs with a very fine needle and leaving them in the nests.

The aim was "to deceive the adults into thinking they were viable, when really they didn't come to fruition."

That didn't work so well though. So in the past two years, they have taken a more drastic measure - shooting them down.