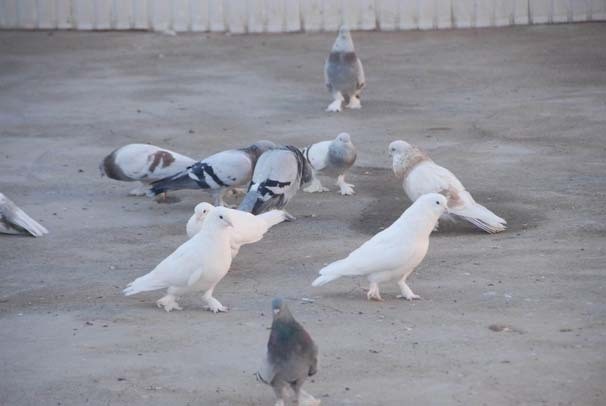 by Oct 12, 2016 12:00 am
In southeastern Diyarbakır, it is very common for pigeons to have their own room in family homes or to see devoted locals caring for these birds on the streets. To support the city's pigeon craze, a 30-room arcade in the city has been transformed into a multi-room pigeon hotel.

Locals who are unable to find a decent place to put their pigeons can take them to the hotel where more than 2,000 pigeons are currently being hosted. The rooms were all designed according to the birds' basic needs and the hotel will be expanded soon due to high demand. Customers generally pay TL 150 ($50) per month in rent. This hotel is one-of-a-kind and Turkey's only hotel devoted to pigeon care.

Mehmet Batmaz, the president of the Diyarbakır Bird Lovers Association, said that the devotion to pigeons is a part of culture, beginning from childhood and growing with the locals who are keen on taking care of the birds. Some have even taken this a step further, installing air conditioners for their pigeons in rooms at the hotel.

The local pigeons come from a variety of bird species originating from the Netherlands, Russia, Germany and Belgium. Architect Halit Koçyiğit who helped designed the hotel, has been caring for pigeons for 30 years. "I helped to establish this hotel and personally have around 150 pigeons of my own. They are all priceless to me," he said, adding that his pigeons are worth almost TL 100,000.

Professional chef Müslüm Bayhan from a local restaurant in the city said that his interest in pigeons began during his childhood. He rents a room at the hotel and frequently visits his pigeons. "I feed my pigeons myself. I do not have children but it feels like I do because I have 60 pigeons here. When they get sick, I look after them and meet their needs."

Pigeons are sold at weekly auctions held on Wednesdays. At the auction, a pair of birds can be sold for anywhere between TL 1,000 and TL 20,000.

Due to the hotel's overwhelming popularity, the association is planning to buy an empty building next to the arcade to expand its pigeon-friendly facility.
Last Update: Oct 12, 2016 1:07 am
RELATED TOPICS