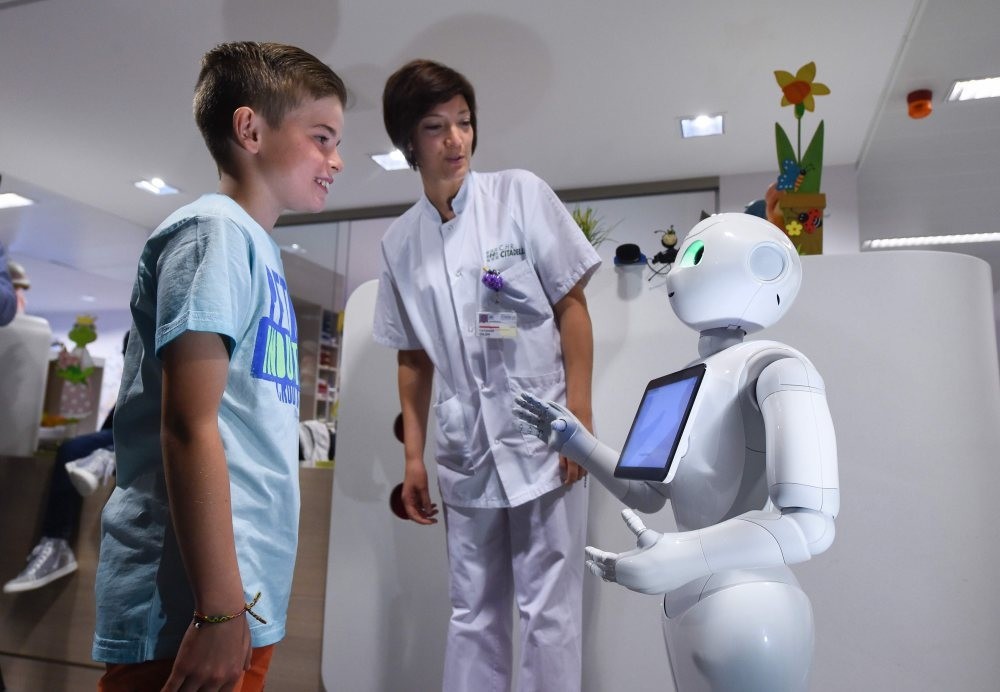 A young boy talks with the robot Pepper next to a nurse at the CHR Citadel hospital centers of Liege.
by Timur Sırt Oct 22, 2016 12:00 am

Humanoid robots that can walk and talk like humans will accompany our children in the near future. Acquiring social skills through special software, these robots will be primarily used at hospitals for patient care and to help parents at home

One of the biggest concerns of a family with children is finding a babysitter. Despite not being as talented as babysitters, human-like robots now support parents in babysitting with their educational and entertainment features, along with security cameras and info screens.

The robot babysitter trend first started in Asian countries and is expected to spread to the U.S. and eventually the whole world with evidence seen in the figures from Tractica, a market intelligence-firm expert in the robotics, where 6.6 million robots were sold in 2015. Considering that the variety of robots with varying abilities will exceed 100 million by 2020, it would be safe to say that a new trend has started. Giant companies such as Alibaba, Softbank and the world's biggest smartphone producer, Foxconn, are expected to take their place in this industry and following their production, prices are expected to decrease significantly. New robots with a variety of abilities, such as "Pepper," "Buddy," "Sota" and "Jibo," have already been released, while these social robots tend to be more expensive, they possess a much wider range of abilities.

There are interesting possibilities for robots in patient health, especially relating to children. According to a study conducted in China: 80 percent of children positively reacted to robots, 5 percent screamed when they first saw them and 15 percent didn't react to robots at all. Although robots minimize human interaction, they could be a positive solution for children and patients that need nursing.

Another advantage of robots is that they enable families to remotely observe what's happening at home via video conference. Robots could also become a simple-interactive education and entertainment tool for children. For instance, when parents are busy with cooking, the robot could entertain the child with lessons or games to keep the child busy. For those with "fur babies," robots still can't take your pets for walks, but they can feed them at home when you are out.

Being a "geek" or "asocial," are two words often associated with technologically-obsessed people, however, these terms no longer apply to robots and their fans. Considering the majority of people spend all day obsessing over their high-tech smartphones, it is no longer fair to generalize technology fans as we are now all officially "techies." It can be said tech-fans consider technology their hobby, interacting and discussing its possibilities, while the general population is losing the psychological ability to manage real-life relationships due to their obsessive-social networking. However, robots can communicate one-on-one with children well enough to establish a social relationship. Depending on the child's mood, they can be programmed to respond with mood-specific scenarios, wake the child up or remind him to do something when it's time.

Smartphones will soon be able to interact with your robot giving orders or updating the robots application system; therefore, robots with a well-designed software development platform and wide-system capabilities are expected to be in higher demand compared to more basic models. For the cheaper consumer robots, other solutions may be available to control them from a smartphone or remote. These robots may help to make children's lives easier, where adults can use smart watches to answer a call, the child would able to use the robot thanks to its multi-tasking features.

Robots are able to mimic human behaviors, although a wide variety of skills have yet to be perfected, movements like grasping, walking, speaking and receiving simple instructions are currently standard features for today's robots. Social robots attract the attention of children with the avatar animations and can tell stories, sing or play simple games.

Once a favorite cellphone

Blackberry, which was one of the most popular business phones after Siemens, Ericsson and Nokia at one time, stopped producing its own phones. The company has decided to cooperate with Alcatel to relieve the loss in hardware.

Once being one of the most favorite cellphone brands and introducing cellphone to Turkey, important brands such as Nokia and Ericsson are not on the Windows store anymore. Siemens Mobile couldn't keep up after a defective production despite mergers. Finnish Nokia was still the most sold phone brand in 2011, but then it started to go down. The legendary Blackberry followed Nokia by considering discontinuing hardware production. Idol 4 of Alcatel, which was bought by a Chinese phone producer, was released as Blackberry DTEK50. There are rumors that Blackberry will discontinue hardware designing that affected its profitability soon afterwards. There were many addicts to Blackberry, which has a keypad on which many users pressed the keys without looking at them.

Merging is not a solution anymore

The supremacy of European countries on mobile technology in the 1990s was lost in the 2000s. The high license fees paid for 3G investments not only made European mobile operators weak but also transferred the investment and innovation on mobile technology to Asia and the North American markets. Europe has difficulty in finding strategies to support small enterprises. The key to transformation is still in the hands of the U.S. and the Far East.

To find a solution, European mobile operators first tried merging. Ericsson, one of the early cellphone brands in Turkey, made Aselsan lose its popularity with fast discounts but it could not survive either. Siemens, on the other hand, transferred its network infrastructure to Nokia a long time ago and merged its cellphone brand with Taiwanese BenQ. The examples show that the companies unable to create an entrepreneurial ecosystem and be an attraction center lose their effect over time.