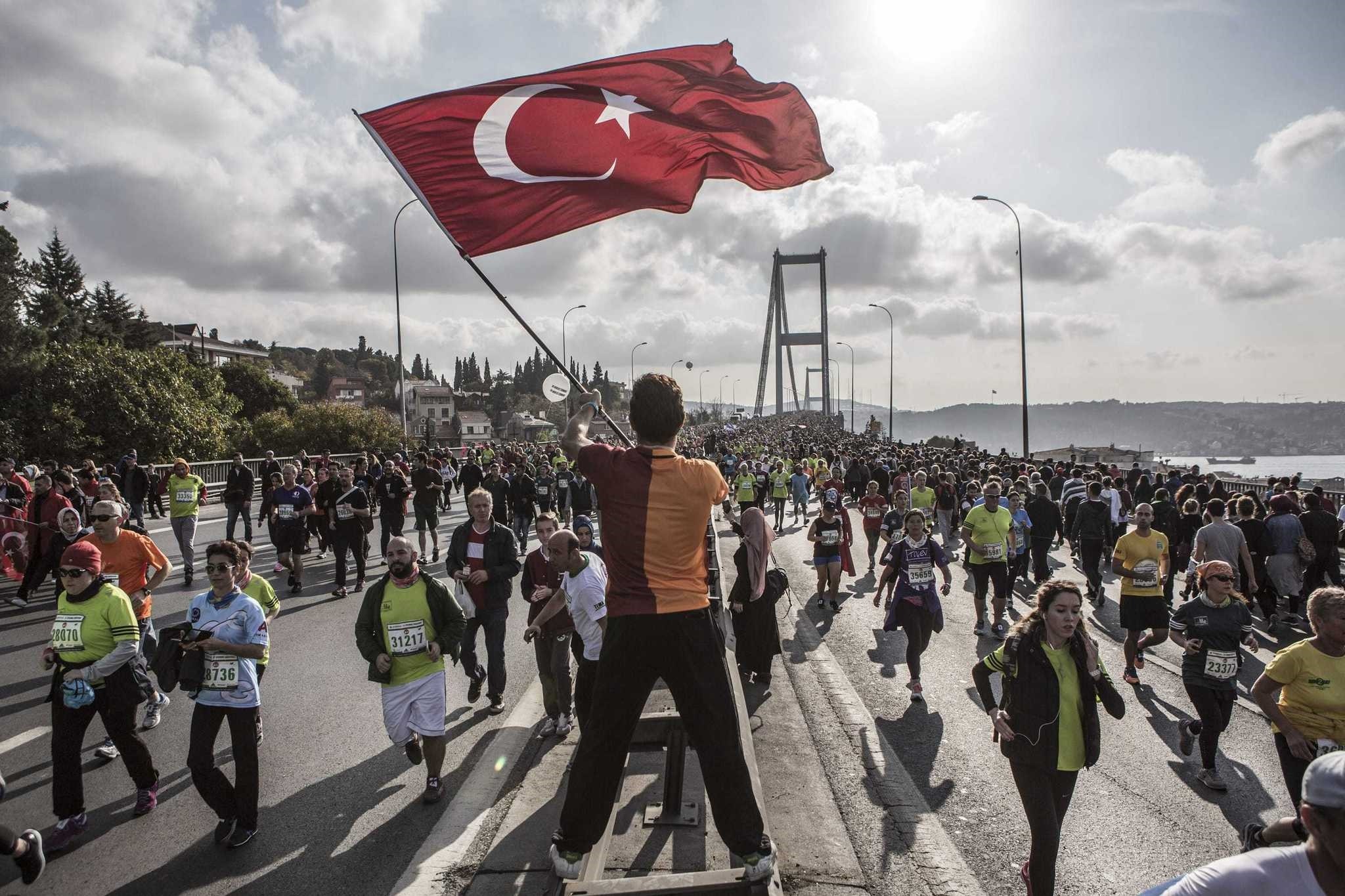 With the theme "Heroes of the July 15 Coup Attempt," the annual Istanbul Marathon will take place next Sunday. Local residents and athletes from both home and abroad will run acrsoss the July 15 Martyrs' Bridge

The 38th Vodafone Istanbul Marathon, organized by the Turkish Athletic Federation (TAF), will kick off on Nov. 13. The federation announced that this year's marathon will commemorate the people who died in the July 15 failed coup attempt.

Turkey's biggest mass sports event, also described as the "Turkish Championship," will start near the July 15 Martyrs' Bridge on Sunday, Nov. 13 at 9 a.m. and end in front of "Dikilitaş" (the Obelisk of Theodosius) at Sultanahmet Square. The running route will be closed to traffic for five and a half hours. Later, the course will be open to traffic and any runners still going will continue on the pavement.

Runners will start the race 300 meters before the Martyrs' Bridge ticket offices, go down to Beşiktaş from Barbaros Boulevard by taking the turnoff and reach Karaköy by following the coastline. Running towards Eyüp after passing Galata Tower, runners will head to Yenikapı over Unkapanı by taking the turn from Feshane. After taking the turn from Bakırköy, the course continues through Gülhane Park via the coast to reach Sultanahmet. The race will end at Sultanahmet Square, a historic meeting and sports point during the Byzantium and Ottoman era, located between Sultanahmet Mosque's entrance gate and Dikilitaş.

In addition to the 42-kilometer marathon, three more races will be organized in the categories: 10 kilometers, 15 kilometers and the Heroes' Race. The first three athletes that reach the finish line in the general rankings will be prize winners.

Giving details about the running event, İsmail Özbayraktar said that the marathon will pay homage to the July 15 coup attempt victims. "We showed to those who wanted to divide our country on July 15 that they could not succeed. That night left some deep scars in us. Our essential duty is to keep the idea of homeland alive and pass it down to the next generations." Özbayraktar also stated that this year's slogan will be "We are running for the July 15th martyrs" on Istanbul Mayor Kadir Topbaş's say-so.

Noting that the eight kilometer public run has been called the "Heroes' Race" this year, Özbayraktar also said the marathon will include a "golden" category with 70 senior athletes, 50 of whom are foreigners. Now that 24,000 runners have applied for race chips so far, Özbayraktar said applications had been accepted until Oct. 15 and late applications will be accepted Nov. 10-12.

"Our 'Green Marathon' title still continues. We plan to expand our traditional marathon memorial forest," Özbayraktar said. He added that they have also organized a Sports and Marathon Fair this year at Sinan Erdem Sports Center and Aslı Çakır Alptekin Athletics Arena as part of the event.

The "My Turkey is Running for Hearing-Impaired Children" project will have around 300 participants run the 10 kilometer race to raise awareness of hearing impairment. Professor Dr. Ferhan Öz, project president and member of the Turkish Ear Nose and Throat Foundation, noted that about 300 people including otolaryngologists, audiologists and representatives of the hearing aid sector will participate, saying, "We are joining this race to draw attention to shortcomings in hearing impairment awareness. We are expecting donations from the race, and the donated amount will be collected in our foundation's fund for use in providing hearing aids to children with hearing impairment."
Employees from various Istanbul companies, groups of runners and volunteers will run for the "There is a Child Inside" project, set up for children up to 6 years old who are living in prisons with their detained mothers. The project, initiated by the Youth Re-autonomy Foundation of Turkey (TÇYOV) two years ago, will step in for the construction of a nursery in the Adana Karataş Women's Prison.
RELATED TOPICS