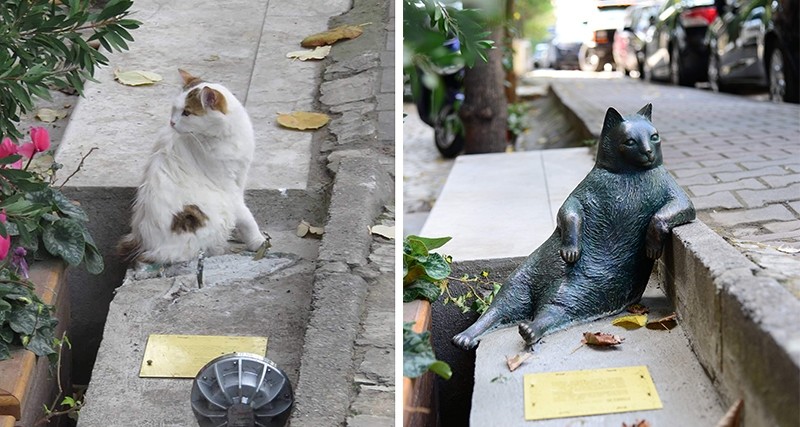 Turkey has continuously been subject to statements from foreign countries bearing concerns about the country's affairs, but this time was a little more unprecedented.

News of the stolen sculpture of Tombili, Istanbul's social media phenomenon cat which gained fame with a funny photo that was widely used on meme sites, caused great distress among the Russians.

In a tweet posted on its official account on Wednesday, Russian Embassy in Ankara expressed concerns over Tombili's stolen sculpture, which was erected on a sidewalk in the Ziverbey neighborhood of Kadıköy district where Tombili posed for his most famous photo.

"The news that Kadıköy's legendary cat Tombili's sculpture has been stolen has echoed greatly in Russia. Russians are also uncomfortable with this situation" the embassy said, while mentioning the account of the Russian Consulate General in Istanbul in a clear directive to look after the issue.

The news came as relief for locals in Kadıköy, who now know that the burglars are being followed by the world's second largest nuclear power, alongside Istanbul police.

However, some users on Twitter took the joke very seriously, showing their resentment of the embassy for being silent on much more serious issues.

Following a petition on change.org, signed by some 17,000 people, demanding a sculpture be built for the famous cat, the commemorative sculpture was erected on Oct. 3 World Animal Day.

On Tuesday, locals in Ziverbey posted pictures of the sculpture missing from its site. İlyas Çetinkaya, a butcher who named the cat and used to feed it, said that the sculpture went missing overnight. "They broke it and took it away. We couldn't figure out who these people are," Çetinkaya said.

Kadıköy Municipality also confirmed the incident and stated a new sculpture will be erected.

The fuzzy cat became popular after her photos, showing her sitting like a boss on a side walk, were circulated on social media channels. Often resembling Garfield's lazy style, Tombili had fallen ill in July and passed away a month later.

According to an article in the Sabah daily, Tombili was born in the neighborhood of Ziverbey along with her sister, "Kezban," who lost her life when she was very small. Züleyla Sarıca and Bahtiyar Sarıca, the owners of the house where Tombili was born, said, "When they were babies we made a small cottage in the garden. Everyone loved them and came to see them to take photos."

The word "tombili" is frequently used for chubby pets in Turkish. Residents in Ziverbey's Güleç Çıkmazı Street announced her passing by hanging posters, saying "You will live in our hearts" on the tree where Tombili would lay.