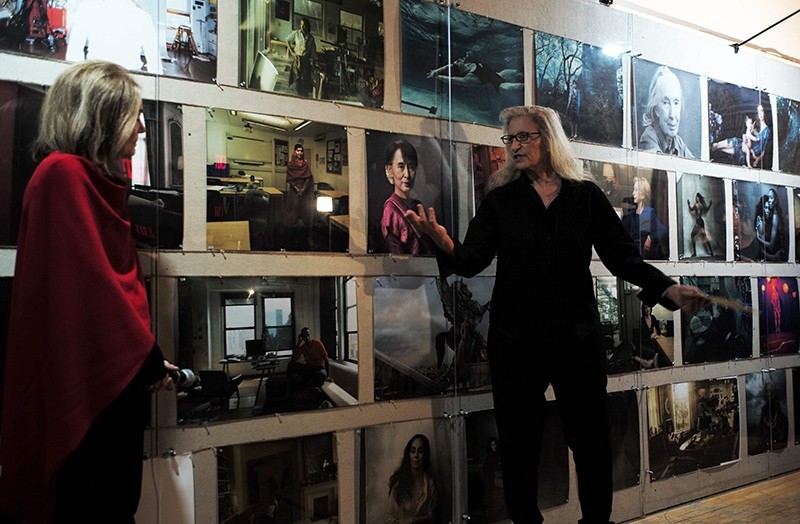 Annie Leibovitz speaks during a press preview of her ,Women: New Portraits, exhibition at the former Bayview Correctional Facility in New York on November 15, 2016. (AFP Photo)
by reuters
Nov 16, 2016 12:00 am
Finding affordable real estate in New York City can take forever. Just ask Gloria Steinem and other feminist activists who searched for decades before finding a building to house women's groups.

"We've been looking for a women's building and hoping to find one for 40 years," said Steinem, who co-founded Ms. Magazine in 1972. "There was just nothing. New York is so expensive."

Finally, renovation is about to begin to transform a former women's prison in New York City into the Women's Building, to offer women-focused groups everything from offices and shared meeting space to on-site child care and a rooftop garden.

It is projected to open in 2020, but the former prison - located in the Chelsea neighborhood, near art galleries and the High Line park - opens its doors to the public on Friday, ahead of its makeover, with an exhibit called "Women: New Portraits" by photographer Annie Leibovitz.

Everyone involved in the renovation of the former Bayview Correctional Facility will be women, from architects to builders and landscapers, organizers say.

With the election of Donald Trump as the next U.S. president, the Women's Building takes on added importance, Steinem told the Thomson Reuters Foundation.

"It is a physical form of a social justice movement," she said. "We are now the resistance."

During Trump's successful campaign against Democrat Hillary Clinton, he disparaged and insulted female reporters and other women and could be heard on a video boasting about grabbing women by their genitalia.


Giving special input into the Women's Building project are women once incarcerated at Bayview, such as Sharon Richardson, who served 20 years in prison for murder and conspiracy stemming from a domestic violence case.

Watching the prison change is like the metamorphosis of a caterpillar into a butterfly, she said.

The metamorphosis will be no small feat. Built in 1931 to house sailors from nearby docks, the heavy-set brick building has raw concrete walls, small windows and worn linoleum floors. Rolls of razor concertina wire wrap some of its outer walls.

But it has great bones, as is said in real estate parlance, with intricate Art Deco details and tile inlays. It was designed by the same architects who designed the Empire State Building.

"No matter how many good days you had, there were enough bad days to remind you of where you were," said Rusti Miller-Hill, who served time at Bayview on drug charges. She was released 20 years ago.

Bayview closed after it flooded during Superstorm Sandy in 2012. In announcing last year that the property would be developed as the Women's Building, New York Governor Andrew Cuomo said it was expected to generate an estimated $43 million in annual economic activity.

"It puts all these groups in the same building so there's solidarity, there's bouncing off of ideas and there's an affirmation that we are a movement," said Yasmeen Hassan, global executive director of Equality Now, a human rights organization. Hassan serves on the project's advisory board.

"The idea for a Women's Building in New York City is decades in the making," said Pamela Shifman, executive director of the NoVo Foundation, a private foundation supporting the project. "This really has been a dream of the women's movement for a long time."