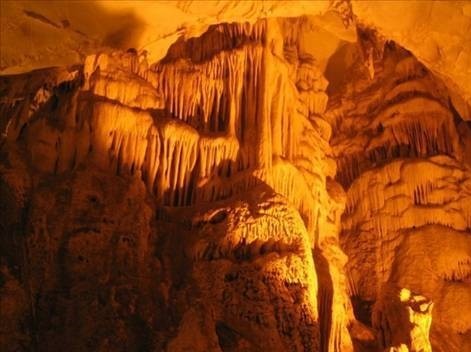 by Anadolu Agency Nov 21, 2016 12:00 am
Every year, the Dupnisa Cave in the western Kırklareli province is closed to visitors for a certain period of time to protect the cave's large bat population.

Lying in the city's Sarpdere village, the touristic cave houses around 60,000 bats from more than 15 different species, all of which hibernate in winter. The hibernating bats can get stressed and even die if they are scared. They also consume the energy they store during the rest of the year and the loss of energy in hibernation makes them physically weak.

Having opened to visitors in 2003 and run by the provincial culture and tourism directorate, the cave has three main chambers. One of the sections called "Kız Mağarası" (Maiden Cave) will not be lit up for six months and will remain closed to help bats' reproduction. Those willing to visit the cave are only allowed to see a very limited section where the bats do not hibernate.

As the only cave in the Eastern Thrace open to the public and believed to be formed during the second geological time, the Dupnisa Cave is reportedly an ancient place for human sacrifice to the god of fertility, Dionysus. Dupnisa is almost 3,000 meters (nearly 10,000 feet) long in total and hosts an incredible collection of stalactites.Spring water comes out of the cave to create the Rezve Stream, which flows to form the border between Turkey and Bulgaria.

Ziya Eser of the provincial culture and tourism directorate said the cave bears significance for the region's tourism potential. The cave will re-open for tourists in May of next year.
RELATED TOPICS