In Aleppo, dreaming of home but finding only rubble 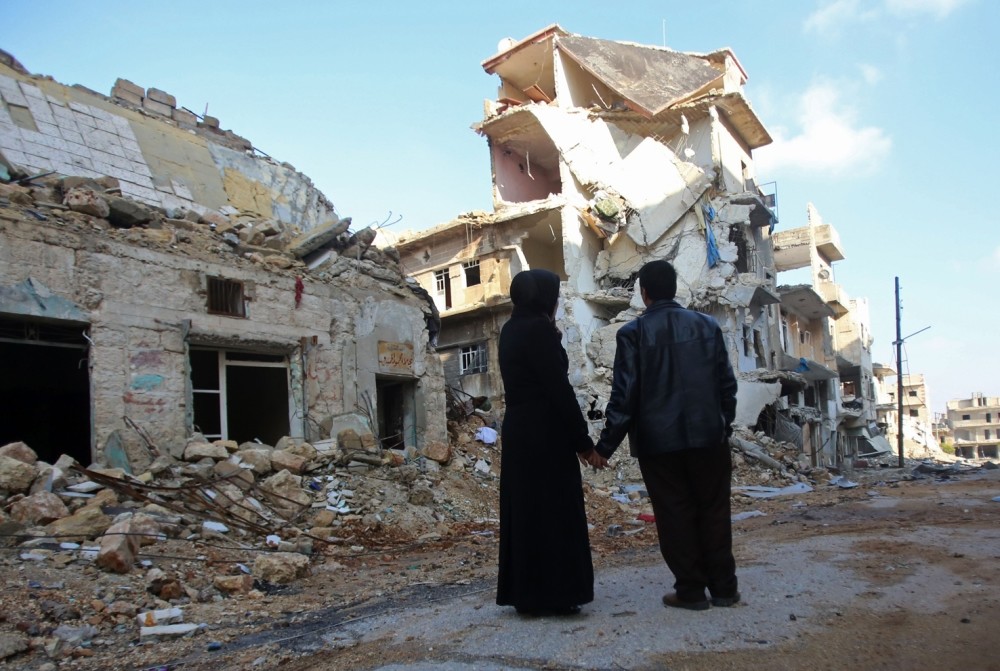 by Dec 06, 2016 12:00 am
Kafa Jawish hadn't slept in days, daydreaming of seeing her home in east Aleppo for the first time in four years, but when she arrived she found little more than rubble.

The 36-year-old was among hundreds of Syrians returning to east Aleppo in recent days after the army recaptured large swathes of the city from rebels and encouraged residents to visit neighborhoods and homes they left years earlier.

She could barely contain her excitement as she sat on a government bus heading to her neighborhood of Haydariya in northeast Aleppo, recaptured by the army earlier in the week.

"I left my house four years ago and I'm just so happy to be going to see it, I haven't slept for three days because I'm so excited," she told AFP as the bus wound its way from western Aleppo.

"I want to ululate with happiness when I see my house safe and sound," she said, dressed warmly in a black coat and headscarf that framed her smiling face.

Stuffed into a bus crowded with other passengers, she and her husband Tajeddin Ahmed discussed their plans to return home, after years living in the Syriac Quarter in central Aleppo.

"I'm going to go back to living in my house no matter what condition it's in," she said firmly.

"We're tired of paying rent, we miss our house and our families and our neighbors."

The couple fled Haydariya in July 2012, when rebels entered the city, leaving at dawn one morning without any of their belongings and moving into the ancient Syriac Quarter.

More than half of Syria's population has been displaced internally or abroad by the conflict that began with anti-government protests in March 2011 before spiraling into a war that has killed over 300,000 people.

"I want to go back to the house that I lived in with my family and go back to living together safely and happily," said Ahmed, 45.

His phone rang as they talked: an old neighbor who couldn't leave work asked Ahmed to check on his house too.

As the bus set out, Jawish expressed hope that her neighborhood might be relatively untouched, reasoning it was far from the frontlines that saw the worst fighting.

East Aleppo has seen some of the worst violence of the war, and has been pounded by the army since it began an operation to recapture the city in mid-November.

As the bus edged closer to Haydariya, Jawish's smile dropped away, and she and Ahmed fell silent.

Along the road, buildings were partially or fully collapsed, windows long blown out and furnishings destroyed or looted.

The route itself was cratered in places, and the bus bounced as Ahmed stared grimly out of the window, murmuring prayers.

Jawish tried to pick out places that held memories, spotting an area she used to picnic with her husband.

Growing impatient with the bus's slow, careful progress, she tried in vain to convince her husband to get out and walk the rest of the way so she could get to her house quicker.

But when they finally arrived, she burst into tears at the sight of their building, parts of the length of one side of it completely gone, leaving the inside exposed to the elements.

Most of the windows were blown out, along with their frames, the front door was missing and a stack of broken tiles was piled up in the doorway.

Unable to enter the damaged building, the couple stood on tiptoes to peer in through a ground floor window at their old apartment.

"We were so optimistic, I thought I was going to ululate when we arrived, but now we've found it like this, uninhabitable," she said tearfully.

"We spent years working to make a home, buying things for it, bit by bit, until we had a washing machine and a fridge, and now there's nothing in it and the house is destroyed. Oh God."

She described the concerts that once took place at their house, with people playing the lute and singing.

"When I look at the house I remember all those beautiful moments."

Ahmed appeared stunned as he looked on, repeating over and over: "Thank God for our health and well-being."

"We sacrificed so much to make this house our home, how will we start over again?" Jawish asked.

"I know that our relatives will all be in the same situation as us, who will help us?"

The couple left to walk through the neighborhood, checking on the homes of their neighbors, all similarly damaged and gutted.