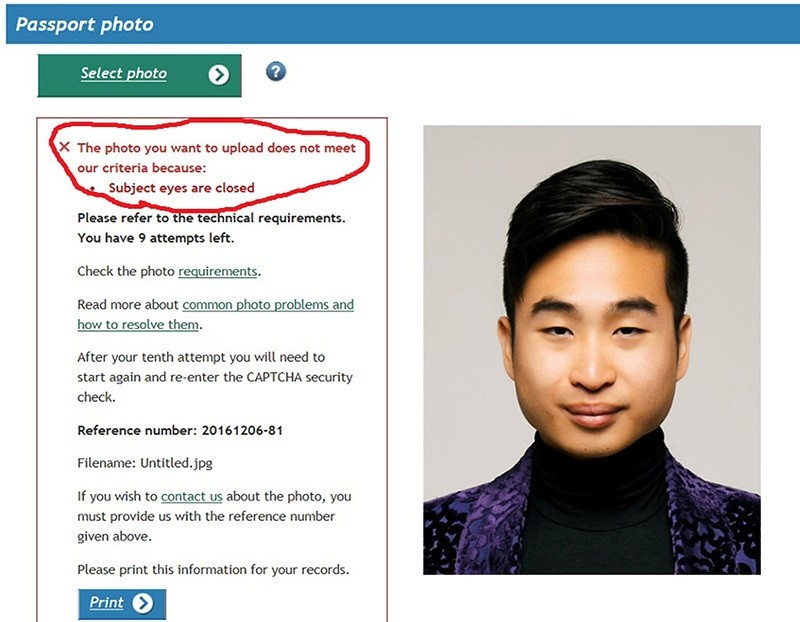 A New Zealander of Asian descent had his passport photo rejected because it was wrongly believed his eyes were closed, but government officials Thursday said it was a computer error and not discrimination.

Melbourne-based Richard Lee was attempting to renew his passport before returning to New Zealand for Christmas only to have facial recognition software at New Zealand's department of internal affairs turn down the application.

A computer-generated response said the photo did not meet New Zealand's criteria because the "eyes are closed."

Taiwan-born Lee, 22, who grew up in New Zealand before moving to Australia to study, was not bothered by the rejection, but some of his friends quipped in Facebook posts that perhaps the New Zealand government had a "racist" robot.

However, internal affairs spokesman Steve Corbett told AFP their systems did not discriminate "against any specific set of individuals" and in Lee's case the issue was with the lighting.

"The most common error is a problem with lighting casting shadows onto the face, which the facial recognition technology interprets as closed eyes and that was the generic error message sent in this case," Corbett said.

Up to 20 percent of photos submitted online are rejected for a large variety of reasons, he added.

Lee, who is studying aerospace engineering at the Royal Melbourne Institute of Technology, said he was not bothered by the rejection.

"I saw the humour in it and obviously it's a programming error in the recognition software," he told reporters.

He posted a copy of the rejection letter on his Facebook page and described the publicity surrounding it as "shameless self promotion" for his alter ego as DJ Richy Fancy.