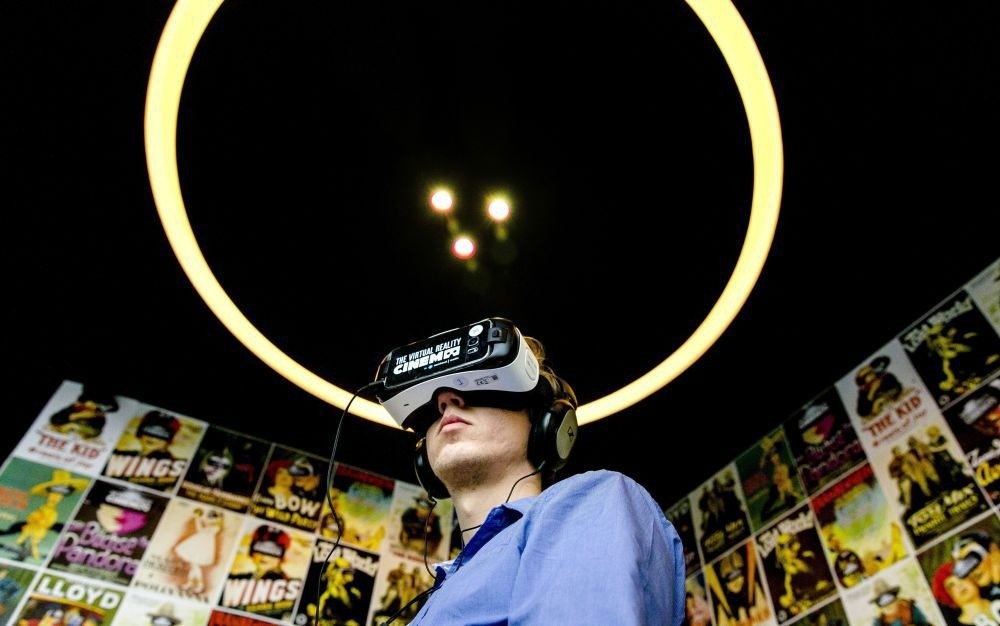 A man wearing headphones and VR glasses to watch films at the Virtual Reality cinema in Amsterdam.
by Timur Sırt Dec 10, 2016 12:00 am

A detailed look at Ericsson's annual report analyzing the trending technologies in 2017 with consumer expectations reveals that AI and virtual reality will have a much more prominent role both in society and work. Virtual reality will be indistinguishable from physical reality in the near future while AI will take over offices as managers

Transferring important company data to Cloud did not used to take much time. However, the amount of important data has multiplied thousands times ever since. The Internet speed can delay companies which want to transfer their data to Cloud for weeks. It is easy to encourage people to transfer their data to Cloud but it is not easy to do so. Transferring the data of a huge company to cloud via the Internet can take weeks. For those who are looking for an alternative, Snowball which is a service introduced last year offers a solution.

You download 1 Petabyte (1 million Gigabyte) data to the memory storage Snowball which is sent by Amazon in a couple of hours and send it back with UPS. Then you solve the data transfer problem in few hours although it usually takes weeks.

The Snowball service is practiced with special 50 TB hard disk in size as big as a suitcase. However, a new solution has to be found in order to meet the needs of the companies which want to transfer their data to Cloud.

But what happens when the data center has to be moved to somewhere else? The scale of the work that has to be done builds up as the data you want to transfer is as big as 1 billion Gigabyte. When it comes to this, you transfer your data with Snowball that is places in huge trucks that you see in the American movies. Thanks to this service which is called "Snowmobile," a transfer process which usually takes six months is completed in couple of days. The data is transferred to smart boxes with a speed of 10 GB per second. IT directors which cannot believe in their eyes as the transfer takes place have been taking selfies with Snowball.

Ericsson (NASDAQ: ERIC) ConsumerLab published its "The 10 hot consumer trends for 2017 and Beyond" which opens a new window for the future. Artificial intelligence is one of the hottest topics of this year's report and the consumers believe that this trend will be more important than ever both in social and business life. Here are the seven hot trends that we will talk about next year:

2. Internet of Things will spread: As more and more automatized applications are introduced in consumers' lives every day, the spreading speed of Internet of Things increases. Two out of every five respondents believe that their smart phones will soon learn their habits and take action automatically instead of them.

3. Pedestrians drive autonomus cars: Drivers may be a thing of the past in the future. One in every four pedestrians thinks that crossing a street where self-driving cars operate is safer. 65 percent of the pedestrians, on the other hand, state that they prefer to have a self-driving car.

4. Merged Reality: Almost four out of five virtual reality users believe virtual reality will be indistinguishable from reality in only three years. Half of the participants are also interested in gloves or shoes that allow you to interact with virtual objects as if they were part of the physical surroundings.

6. The smart device safety paradox: More than half of the respondents make use of panic buttons, smart locators and identity authenticators of their smart phones. Three out of every five people who feel safer with their smart phones take more risks in their lives.

7. Social Silos: Today, people are using their social media accounts as "silo" by their own choice. One in every three people state that they see social media networks as a source for news. More than a quarter values their contacts' opinions more than politicians' viewpoints.

8. Privacy: One of five Internet users prefer to use encoded services, yet there is a split in opinions. While half of the users think that privacy at a reasonable level should be given to all services, more than one third of the users believe that privacy no longer exist.