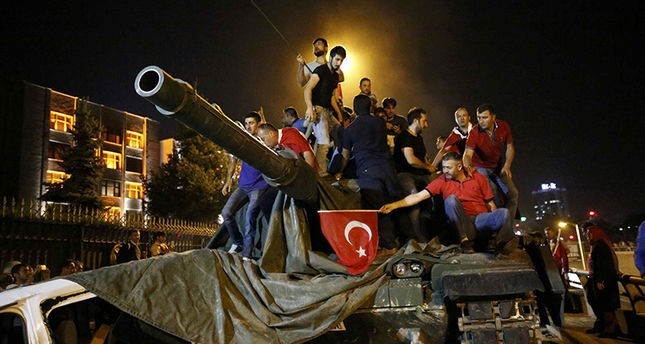 People stand on a Turkish army tank in Ankara, Turkey July 16, 2016. (Reuters Photo)
by Daily Sabah Dec 16, 2016 12:00 am
When they were not busy online looking for recipes on how to make the best slime, Turks were occupied with learning about a more serious issue: climbing atop a tank. The 2016 search trends released by the Google search engine have revealed that Turkey's obsession with 16-year-old singer Aleyna Tilki almost equaled their will to fight the July 15 coup attempt, blamed on a small junta tied to the Gülenist Terror Group (FETÖ).

Unlike Americans, who turned to the search engine giant most for playing Pokemon Go, in the "How to..." category of search trends this year, Turks were looking for information on making the best slime, how to apply for the civil servant exam and, yes, climbing up tanks.

Though a tank and khaki-colored trucks full of soldiers armed to the teeth are an intimidating sight even in peaceful times, Turks overcame their fears to confront pro-coup troops on July 15. Armed only with flags, Turks risked their lives against tanks and managed to force the coup conspirators to withdraw and surrender, with the aid of police officers and soldiers not involved in the coup.

Tips from social-media users and military experts on how to render military vehicles ineffective, along with how to stop heavily-armed people in the case of a coup attempt, have provided an insight on survival during the fight for democracy.

Running towards the tanks was the first instinct of people bent on stopping the troops, and some managed to survive the confrontation after heeding the advice of lying sideways against the oncoming tanks.

Sabri Ünal, a 34-year-old who took to the street to stop the tanks, was hailed as one of the coup heroes. He was mowed down by two fast-moving tanks when he refused to give way. Ünal was heavily injured, but survived, like Metin Doğan, who became a symbol of anti-coup resistance when he rushed to lie down before a tank at the airport in Istanbul. Doğan was spared from certain death at the last minute when the tank finally stopped and the airport was liberated from pro-coup troops.
RELATED TOPICS