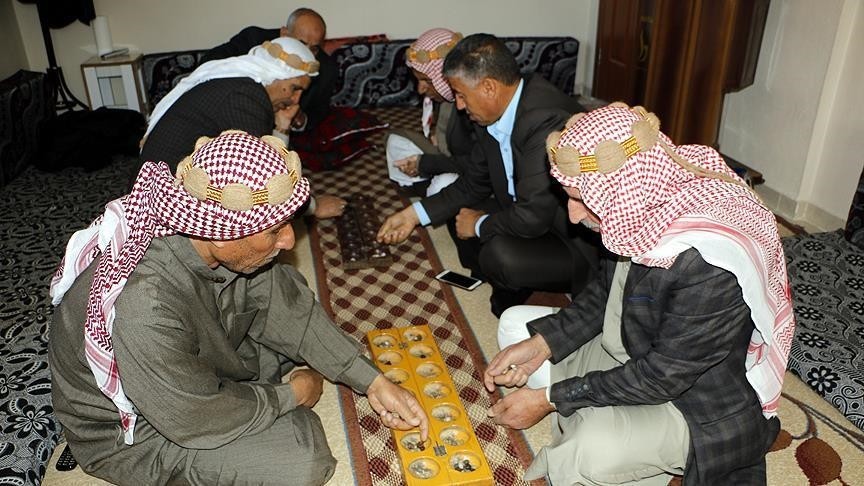 by Daily Sabah with AA Dec 16, 2016 12:00 am
A traditional strategic game with a history of five centuries in Turkic regions, "mangala" (or mancala) is still popular in small Turkish towns like Akçakale in the southeastern Şanlıurfa province. The board game is played with 48 stones and two people - or in groups. On a game board, there are six identical pits arranged in two rows, which together make up 12 pits and there are big storage wells - storages, in which players will collect stones.

Akçakale locals who learned the game from their parents or grandparents still enjoy it. İbrahim Toprak, 52, one of the town locals, said that the game is popular mostly among the elderly. Last year, the Akçakale Municipality held a competition to get young people familiarize with the board game. "When we were children, we were also playing it on soil. I wish my grandchildren learn it too," he said. Another local, Ali Güneş, 60, said that they entertain themselves at home in cold winter days.

According to the rules set by World Nomad Games, the game begins with a drawing of lots. Players distribute all 48 stones in 12 pits that each pit has four stones. Storage wells remain empty. Six small pits lying in front of each player is the area of that player. Six pits lying in front of him is the area of his opponent. The player's aim is to collect as much stones as they can in their storage wells. The one who has the most number of stones at the end of the game is the winner.

The game remained popular in the Ottoman Empire and is revived during the annual World Nomad Games during competitions. The strategy game has also different variations in some African countries.
Last Update: Dec 16, 2016 1:40 am
RELATED TOPICS