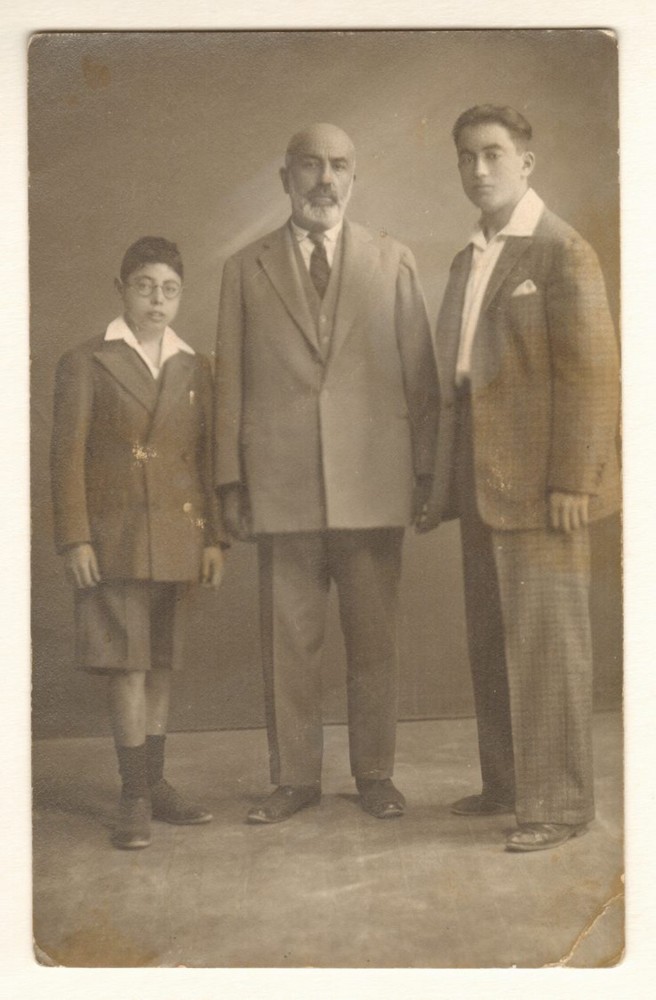 Featuring national and moral values in his poems, Mehmet Akif Ersoy, who also wrote the lyrics to the Turkish national anthem İstiklal Marşı, is to be commemorated on his 143rd birthday.

Known as Turkey's "National Poet," Ersoy was born in the Fatih district of Istanbul on Dec. 20, 1873. His mother was Emine Şerif Hanım, who was the daughter of a family who moved from Bokhara to Anatolia, and his father was Mehmet Tahir Efendi, who was born in Kosovo and was one of the teachers at Fatih Mosque's madrasah. 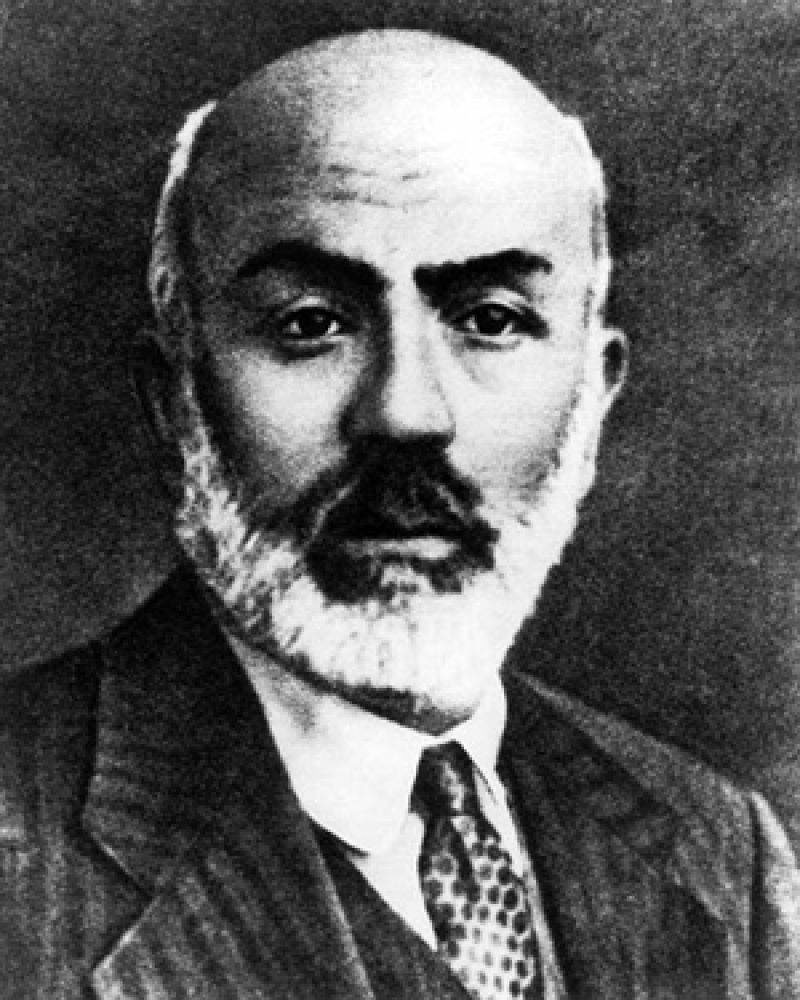 His father gave him the name "Ragif," which refers to Mehmet Akif Ersoy's birthday in the Arabic abjad calculation, but his friends and his mom called him "Akif" because the pronunciation of "Ragip" was hard. He adopted this name over time.

He went to Emir Buhari Local Primary School in Fatih and started his secondary education at Fatih Central Ottoman Junior High School two years later. He first learned Arabic from his father and also followed Persian classes in Fatih Mosque. He was always among the best students in Turkish, Arabic, Persian and French language courses during his education in high school.

Ersoy developed an interest in poetry when he was in high school first and the first poetic text he read was Layla and Majnun by Fuzuli. 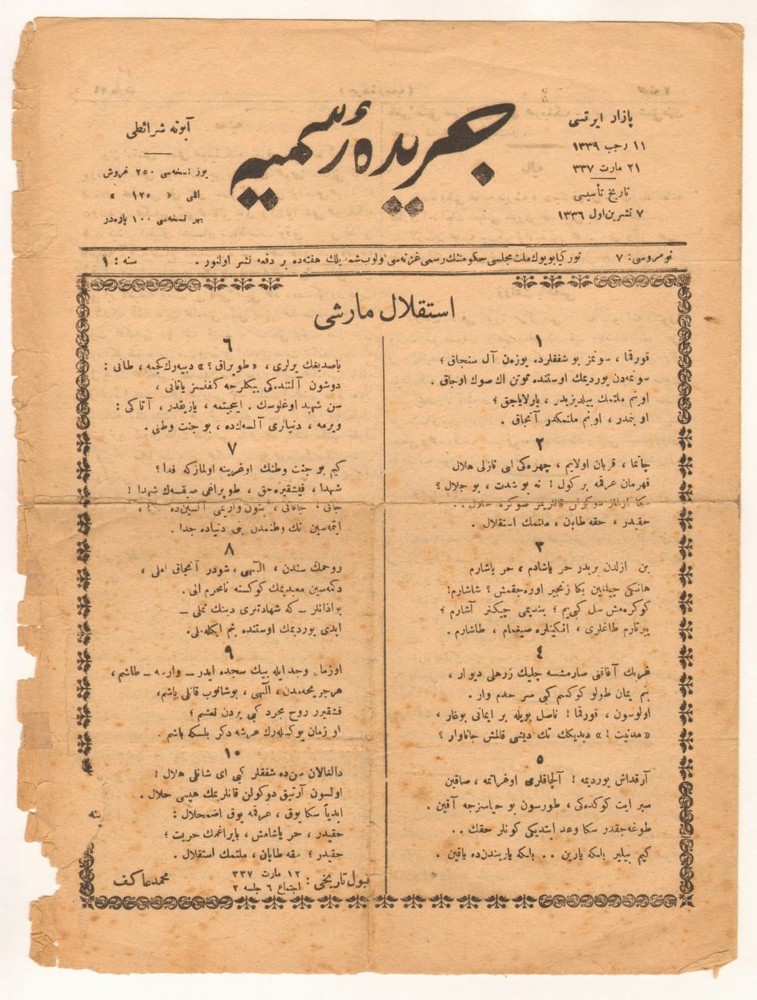 İstiklal Marşı, which Ersoy devoted to the army, was published in Sırat-ı Müstakim and in Hakimiyet-i Milliye newspapers on Feb. 17, 1921. After it was read by Hamdullah Suphi Bey in Parliament, it was accepted as the national anthem of Turkey on March 12, 1921, as can be seen on the photograph above.

After completing high school, Mehmet Akif Ersoy enrolled in Mülkiye İdadisi high school, one of the better schools at that time, in 1885. His father passed away in 1888 and his family plummeted into poverty after a fire in Fatih destroyed their homes.

Ersoy wanted to have a profession and to study in a boarding school, so he left school and started the "Agriculture and Veterinary School," the country's first civil veterinary school. He also developed an interest in sport during his school years and participated especially in wrestling and swimming, but also hiking, running and the shot put.

He completed his education at the department of veterinary studies as the first-ranked student in 1893. His interest in poetry grew during the last two years of school and some his poems were published in various newspapers and journals. His first printed work was a gazelle that was published in the Hazine-i Fünun journal in 1893.

The poet was married to İsmet Hanım in 1898. He had three daughters and three sons, however one of his sons died when he was only one-and-a-half years old.

He continued his works in literature by working as a teacher and also writing poems. He entered into the publication world with the declaration of the "Second Constitutionalist Period" in 1908. He became the editor-in-chief of the journal "Sırat-ı Müstakim" that was published by his friend on Aug. 27, 1908.

Mehmet Akif Ersoy was elected deputy for Burdur and entered Parliament in 1920 then moved to the Taceddin Dervish Convent in Ankara in 1921.

Ersoy at first did not want to participate in a contest for İstiklal Marşı with a prize that was worth TL 500. After Education Minister Hamdullah Suphi Bey requested that he participate in it and his friend Hasan Basri Bey encouraged him to do so, he was convinced. İstiklal Marşı, which he devoted to the army, was published in Sırat-ı Müstakim and in Hakimiyet-i Milliye on Feb. 17. After it was read by Hamdullah Suphi Bey in Parliament, it was accepted as the national anthem of Turkey on March 12, 1921. Ersoy donated the prize money to a charity.

He lived in Egypt for a long period after the victory of the War of Independence and offered Turkish classes there, then returned to Istanbul on June 17, 1936 for treatment. He passed away at Mısır Apartment on Dec. 27, 1936.
Last Update: Dec 21, 2016 1:03 am
RELATED TOPICS