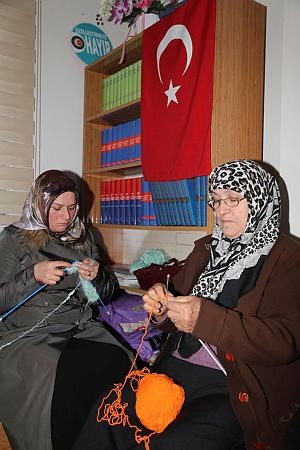 Fourty women knit scarfs, beanies and gloves for Aleppo children. The volunteering women have managed to knit 100 scarfs, 200 beanies and many pairs of gloves so far.
by Anadolu Agency Dec 24, 2016 12:00 am
The Women's Branch Commission of Öz Gıda Trade Union's Eastern Black Sea Office has launched an aid campaign titled "Don't Let Aleppo to Be Cold."

As part of the campaign, fourty women knit scarfs, beanies and gloves for two hours. While the necessary tools and products for knitting are given by Öz Gıda Company Union's Eastern Black Sea Office, the volunteer women have managed to knit 100 scarfs, 200 beanies and many pairs of gloves so far.

President of Eastern Black Sea Rize Branch Sultan Murat Karadağ stressed the importance of the campaign that has been launched by the Women Branch of the company union. Karadağ said that the seasonal workers are contributing to the campaign despite the financial difficulties that they have experienced lately. "The spirit of Nene Hatun, a Turkish folk heroine, has not and will not die in Turkey. The national struggle that we gave in the War of Independence continues with the same feelings. The people with evil agendas do not know Turkey and the people of Anatolia. The women in our Women's Branch wanted to send their knitting works as well as their prayers to the children in Aleppo. There is an aid campaign in Turkey and we wanted to contribute to it," Karadağ said.

President of Women's Branch Communion Dilek Kansız said that they initiated the campaign with the women who work at ÇAYKUR and the company's members. "Our friends here wanted to support the campaign by knitting beanies, scarfs and gloves for people in Aleppo", Kansız added.

Kansız said that her friends showed their motherhood, courage and generosity by contributing to the campaign and continued: "We are not just knitting here. We put our prayers in each and every one of those knots. We knit our feelings of motherhood and love. We hope his love and prayers reach to Aleppo and all children who are oppressed. We want all suffering to come to an end. Our motto is that 'the world will be saved by goodness.'"