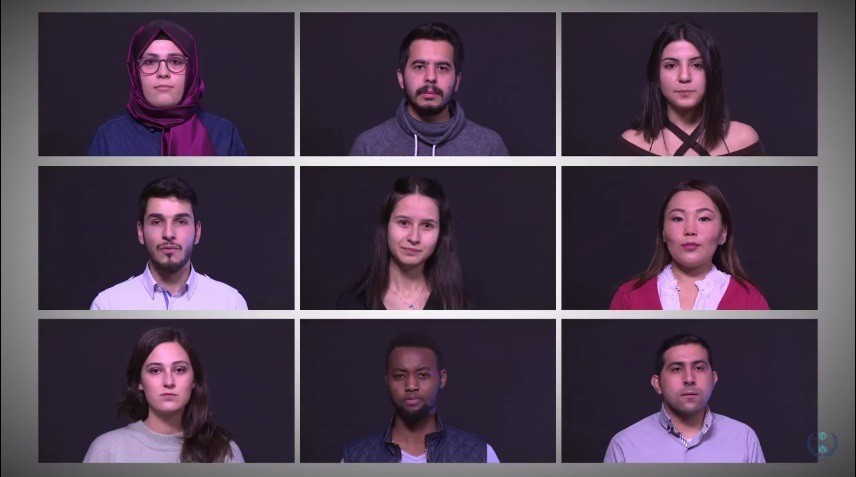 by Daily Sabah with AA Jan 03, 2017 12:00 am
International students at the Eskişehir Osmangazi University (ESOGÜ) have released a video clip, denouncing terror attacks both in Turkey and abroad in 30 languages and shared their desire for "A world without terror."

Prepared by members of ESOGÜ's Diplomacy and Model United Nations Students Club (DiploMUN), the video shows students of different nationalities, speaking the same message that "they will not surrender to terror and will not let it restrain them from realizing their dreams."

The students in the video say, "we are the future," and that no one should become a victim of terror. The production features students from different Asian, Balkan, Middle Eastern and African countries. Each student in the video offers a look at terror from different viewpoints and each say "no to terrorism" in their native languages toward the end.

The video clip has been subtitled in English, Turkish as well as in sign language.

In a latest act of terror in Turkey, 39 people were killed when an armed assailant opened fire at Reina, a popular nightclub in Istanbul in the early hours of Sunday. The assailant is still at large.

Twenty-four of the victims were identified as foreigners, 11 were Turkish citizens while four victims still remain to be identified, officials confirmed on Sunday.

Seven Saudi Arabian, two Indian, one Canadian, one Syrian, one Israeli, two Moroccan, one Lebanese, one Belgian and four Iraqi nationals were among the victims.

Later, Daesh claimed that one of its terrorists carried out the attack.
Last Update: Jan 03, 2017 1:05 am
RELATED TOPICS