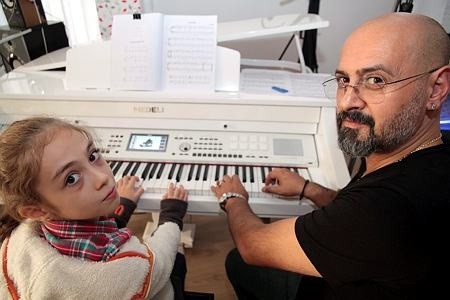 by Anadolu Agency Jan 03, 2017 12:00 am
After leaving his native Iran for Denmark 12 years ago, Iranian musician Siavash Shahani has since settled in the quaint coastal town of Alanya in Turkey's southern province of Antalya, where the musician says he feels like he is in heaven despite having only visited Turkey briefly on his journey to Denmark over a decade ago.

While making the journey from Iran to Denmark, Shahani spent three months in Turkey before travelling onward to Europe, settling for only six months in Denmark before returning to Istanbul where he performed Persian music and later Turkish music as well.

Nearly seven years ago, Shahani moved to Alanya where he found happiness and peace, composing music and providing music lessons in one of Antalya's most beautiful districts.

Shahani, who shared his epic journey from Iran to Alanya with an Anadolu Agency (AA) correspondent, said he first came to Turkey 12 years ago and first considered Turkey as a "transit country for passing through on his way to Europe."

Shahani released three studio albums while he was working at Iran's state TV. The Iranian native said, "Back then, it was very hard for me to perform my art. Most Iranians considered music illicit. However, such an oppressive approach towards my music is no longer the norm. There is even a music conservatory in Iran,"Shahani added. He said he wants to benefit from every opportunity that Turkey has to offer his, adding that he feels like he lives in heaven in Alanya.

Shahani said he finds Turkish music and its maqams to be quite similar to Iranian music, asserting that he has released two studio albums in Turkish while explaining that his songs usually focus on the central theme of peace, adding: "I prefer music which sings about a world devoid of guns and war."

Shahani said he does not have any plans to return to Iran and considers himself "half Turkish."

Shahani said despite the negative comments directed at Turkey from observers abroad, he considers Turkey to be unlike "Any other nation in the world and a country which loves to host foreign nationals more than the Turks themselves. When I settled here, I understood that there is no way the Turks could be considered a racist people because they love foreigners. As a foreigner I never fear the possibility of being without a job as a performer because I know that the Turkish people will do everything they can to book me a performance despite the competition."
Last Update: Jan 03, 2017 9:11 am
RELATED TOPICS