by Anadolu Agency Jan 04, 2017 12:00 am
The "Bardız Rug," used in tents and homes in the 11th century during the reign of the Saltuqid Dynasty in modern-day Erzurum province in eastern Turkey, has been given a new lifeline since a group of women living in the Turkish city began creating these ancient rugs and selling them to make a living.

The traditional rug of the Saltuqids, who once ruled Erzurum and the surrounding regions, has a deeply rooted history and was woven during the reign of the Seljuks, the Ottomans and even during the early years of the Republic of Turkey before falling into obscurity due to lack of demand. 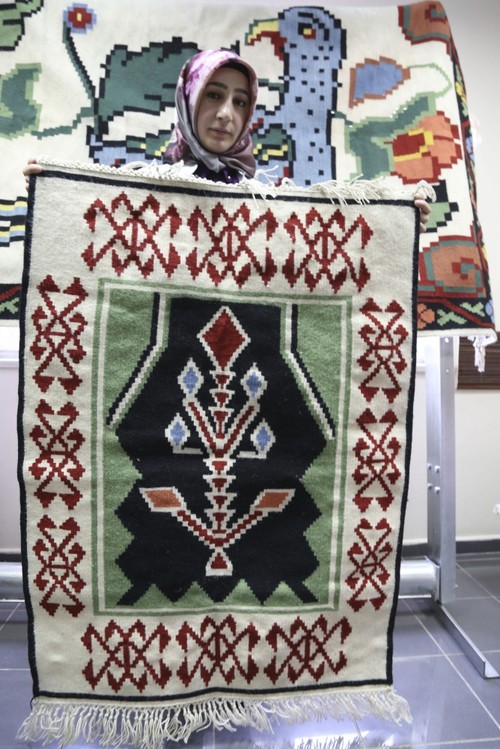 Bardız rugs are made entirely of sheep's wool, and painting techniques for decorating the rugs in accordance with ancient tradition which involves using paints derived from non-chemical sources such as roots and stones.

After centuries however, the Erzurum Metropolitan Municipality is bringing this ancient traditional rug back to life, having initiated a project to revive production of the woven coverlet, offering courses to local women in collaboration with the local Artistic and Vocational Training Courses (ESMEK), where participants are learning how to weave Bardız rugs, made entirely of sheep's wool, and painting techniques for decorating the rugs in accordance with ancient tradition which involves using paints derived from non-chemical sources such as roots and stones.

Upon completion of the course, a total of 34 women living in Erzurum are now weaving Bardız rugs with the same materials used by the Saltuqids in the late 11th and early 12th centuries.

Kulanşi underlined that this group of local women are weaving rugs in workshops located in the city center of Erzurum as well as the district of Şenkaya.

"Bardız rugs, which have a deeply rooted history, are being recreated with the same materials that were used hundreds of years ago. Back then, these rugs were laid down in tents. We are reviving this ancient tradition by weaving animal and plant motifs on these rugs. It took us two months to reproduce a single Bardız rug, which originates from the Erzurum region. We have established our workshops and have begun weaving more rugs and we will continue to do so. Furthermore, local women who are working in our workshops contribute to their families' incomes with the salary they receive," he said.

Kulanşi also indicated that one of the most important features of the Bardız rug is the use of bright colors, underlining that these traditional rugs are woven with threads made from sheep's wool. He said, "The special weaving technique used to make the Bardız rug is what makes it very durable. The colors of the rugs are guaranteed to maintain vibrancy for 50 years without fading. The colors will always be as bright as they were on the first day they were woven."

He said there was no shortage of markets for these rugs which are expected to be widely successful, reproduced under the auspices of the Erzurum Metropolitan Municipality.
Last Update: Jan 04, 2017 1:05 am
RELATED TOPICS