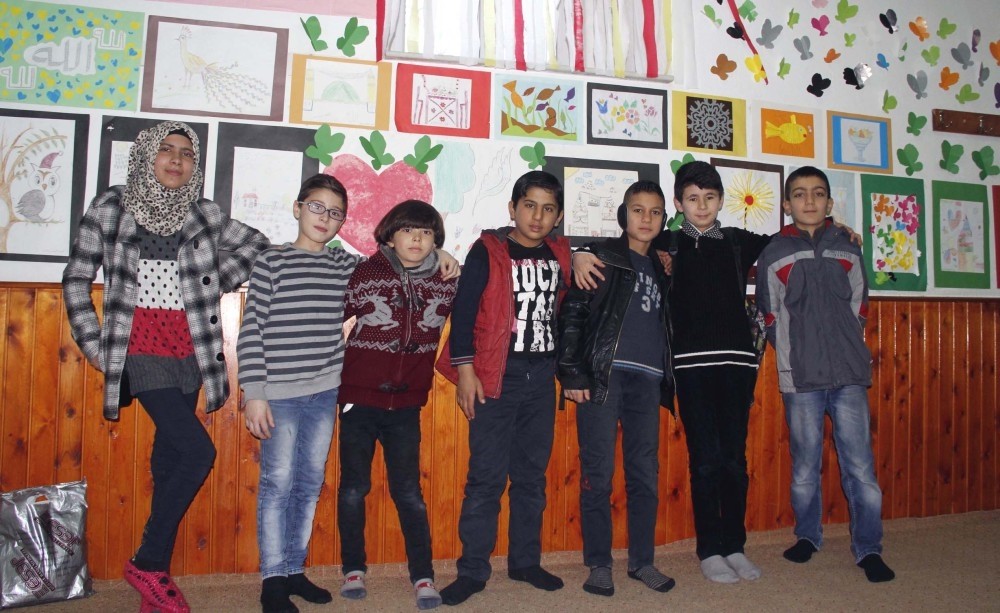 by Anadolu Agency Jan 14, 2017 12:00 am
Paintings from Syrian children offer a display of hope and peace while attracting the attention of audiences at an exhibition opening in the district of Argıncık in the province of Kayseri, with contributions from the Kayseri Syrians Ensar Education Culture Assistance and Solidarity Center.

The exhibition is on display at the center where Syrian children are educated according to Syrian school curriculum. Children of different age groups expressed their love for Turkey and the Turkish people with "The Turkey Corner" they put together in their classrooms.

The illustrations painted by the Syrian children on the walls of the education center are filled with vibrant colors and white doves, symbolizing peace. It is interesting that none of the paintings bear the traces of war. The paintings, centered around the themes of family, spring and sunny days, reveal that the countless number of children who have begun a new life in Turkey are hopeful about their future.

Vasim Al Hamdo, an artist and painting instructor, told an Anadolu Agency (AA) correspondent that he moved to Kayseri with his family two years ago after fleeing the ongoing civil war in Syria.

Explaining that the Syrian children started off a new life in Turkey, Al Hamdo said: "These children saw war and ran away from it, starting a new life here. Furthermore, there are orphaned children among the students who have gone through very difficult times but this is their new life. I gave them the liberty to il

lustrate whatever they want in their art. The paintings display colors of spring and hope. These children want to be optimistic and they have goals. Their dreams are all depicted in the colors of spring. We see butterflies, birds, flowers and sun in these paintings. These children are building a new life for themselves. There are no paintings here referring to war even though the entire country [of Syria] is [a dangerous war zone]. Even if I leave Turkey one day, my children love this country and they are studying here. We are very happy to be in Turkey but unfortunately there is no hope for Syria."

Muhammad Ali, one of the teachers at the temporary education center, said he worked for the Board of Education and Discipline in Syria and worked as a teacher for 30 years. Now, Ali is teaching children at the Kayseri Syrians Ensar Education Culture Assistance and Solidarity Center.

Underlining that he is married to a Turkish woman and came to this country to flee the ongoing civil war, Ali expressed his joy in helping Syrian children in Turkey.On the other hand, nine-year-old Ayşe al-Haci who has studied at the center for three months said, "I did some thinking and decided to paint white doves. I wanted to portray positive hope in this way." When asked if she would like to return to her native Syria after the war ends, al-Haci said she would like to return home.

Eighth-grader Remim, also from Syria, said he has lived in Turkey for two years, asserting: "I love Turkey but I was happier in my country. One day, I would like to go back. Most of my relatives died in the war. In my paintings, I have drawn butterflies and flowers."
Last Update: Jan 14, 2017 1:13 am
RELATED TOPICS