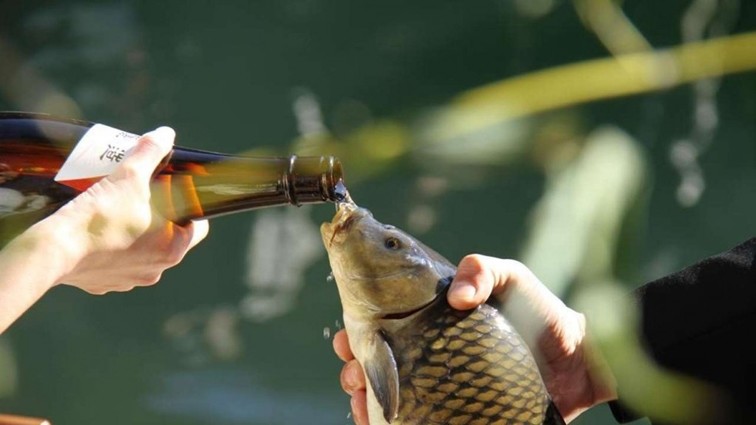 by Jan 16, 2017 12:00 am
A religious ceremony in Japan where carp are plied with alcohol before being returned to a river has left animal rights activists feeling green around the gills.

But the bizarre Shinto ritual has become entangled in controversy after featuring on national television earlier this week, with images of the flapping carp triggering an online backlash from upset viewers, many accusing organizers of animal cruelty.

Many of those who tweeted or posted to online chatrooms called for an end to the "abusive practice" and accused organizers of "intoxicating wildlife."

During the ceremony, said to date back to the early 19th century, men and women hoping for a karmic boost are blessed by a priest.

The men then each hold a carp - a sacred fish in Japan - while a woman pours the purifying alcohol into the creature's mouth before it is released back into the water.

But after Japan's Asahi TV aired coverage of the event, a Twitter storm suggested many viewers disapproved of putting the fish's health in peril.

"It just seems like abuse," wrote one, while another called it "harassment" of the fish.

Organizers acknowledged to the news site J-Cast that they had received several complaints from the public.

The ceremony's defenders insisted it was part of Japan's cultural heritage, with one online comment complaining: "People are too uptight these days."

TV Asahi's "Morning Show" interviewed a fish expert who claimed that alcohol does not harm the animal as the toxic liquid escapes through the gills.

The outcry is the latest in what looks like a fledgling movement to protect the rights of fish in Japan.

Last November a Japanese skating rink that froze 5,000 dead fish under the ice as an attraction for visitors was forced to close after receiving a barrage of criticism.
Last Update: Jan 16, 2017 2:20 am
RELATED TOPICS