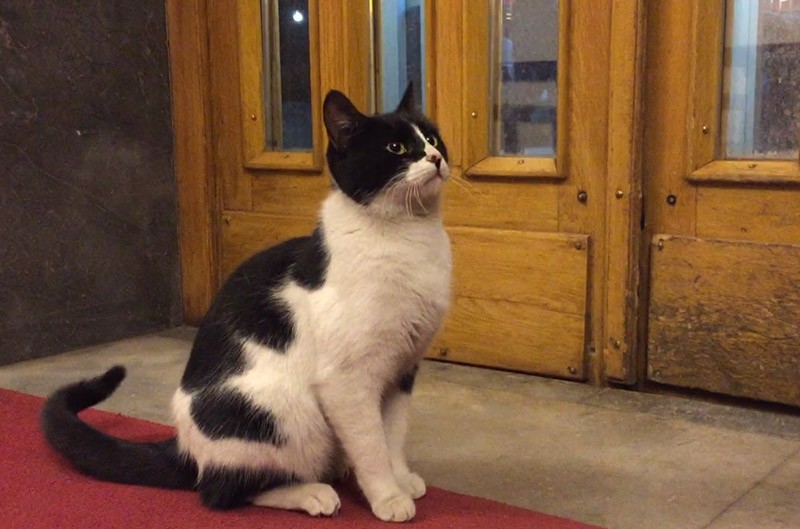 For the past week the new constitutional reform package has been keeping deputies at the General Assembly in Ankara very busy, which makes the assembly's adorable, bi-color cat named "Kulis" — a name referring to the "Parliament's lobby" — a sweet and welcome break. Similar to the rest of the country, cold weather has hit the Turkish capital of Ankara and the street cat has found a cozy and warm place for shelter.

Everyone is feeding the cat, giving it food and milk at the assembly. Kulis has already brought cheer to the atmosphere of the Turkish Parliament, where the rigorous schedule is putting strain on the deputies' nerves.

Living in the assembly's lobby, Kulis plays with the deputies, skirting around their chairs demanding love and attention. Many deputies have taken to the cat, showing their affection whenever they see it, and they bring Kulis food and milk every day.

Metin Külünk, a deputy from the Justice and Development Party (AK Party), is among those who have become attached to Kulis. With its friendly manner and easy-going nature, Kulis has already become a favorite at Parliament. "Kulis understands we love it very much and is always ready for more. Many deputies offer Kulis milk whenever they see it," Külünk said and showing the cat's black and white fur, "Kulis is also a Beşiktaş supporter," he added, laughing.

The feral cat population in big cities is quite large and Parliament is no exception when it comes to looking after them. Street cats can freely come into shops, restaurants and even into a house and just as easily walk out again. In the winter, many unclaimed animals are looked after with the utmost care at shelters, rehabilitation centers or even malls where locals offer them a warm place to stay.