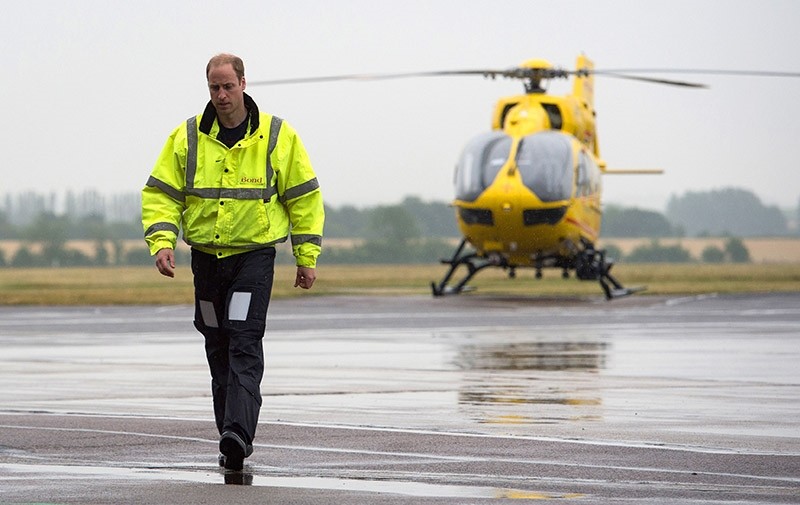 Britain's Prince William walks away from his helicopter as he begins his new job as a co-pilot with the East Anglian Air Ambulance (EAAA) at Cambridge Airport, Britain July 13, 2015. (AFP Photo)
by Compiled from Wire Services Jan 21, 2017 12:00 am

Britain's Prince William will give up his job as an air ambulance pilot and spend more time in London with his family to concentrate on his royal duties, Kensington Palace said in a statement on Friday.

William and his wife Kate and their two children, Prince George and Princess Charlotte, have been based in a house on his grandmother Queen Elizabeth II's Sandringham estate in Norfolk in eastern England.

George, three, will start pre-school in London this year and one-year-old Charlotte will go to a nursery, the statement said.

The 34-year-old prince is second in line to the British throne after his father Charles.

"Following on from my time in the military, I have had experiences in this job I will carry with me for the rest of my life, and that will add a valuable perspective to my royal work for decades to come," William said in a statement.

William served in Britain's armed forces from 2006 until 2013, working latterly as a search and rescue helicopter pilot. He then launched a new career as an air ambulance helicopter pilot with the East Anglia Air Ambulance near his home.

His office said in a statement the prince would leave his job in the summer and move his wife Kate and two children from Anmer Hall, their country mansion, to Kensington Palace, their official London residence.

But Kensington Palace said Anmer Hall in Norfolk would "continue to be their home".

"As they have in recent years, their royal highnesses are keen to continue to increase their official work on behalf of the queen and for the charities and causes they support, which will require greater time spent in London," the statement said.

The queen, who turned 90 last year, has cut down the number of official engagements she carries out and announced before Christmas that she would step down as patron of a number of organizations.

Those duties are being passed on to son and heir Prince Charles and other members of the royal family.