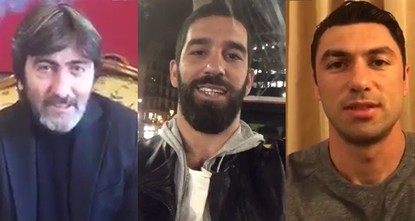 Well-known figures in Turkey started a campaign on Twitter on Tuesday in support of the "yes" vote in the upcoming referendum about constitutional amendments and a switch to the presidential system.

"Count me in!" Turkish celebrities take to Twitter to back "yes" campaign in upcoming referendumhttps://t.co/aBEMBk8xs2 pic.twitter.com/mxs1INQb4R

Football commentator and former Fenerbahçe player Rıdvan Dilmen posted a video of himself, in which he pledges full support for a strong Turkey, emphasizing the word "yes".

Towards the end of the video, Dilmen directs the question "Are you with us?" to Barcelona midfielder and the captain of Turkish national team Arda Turan. Turan quickly responds with a message of support and then turns to Turkish footballer Burak Yılmaz. The chain continues with Yılmaz asking Turkish pop singer/actor Murat Boz the same question, to which he replies with a 'count me in.'