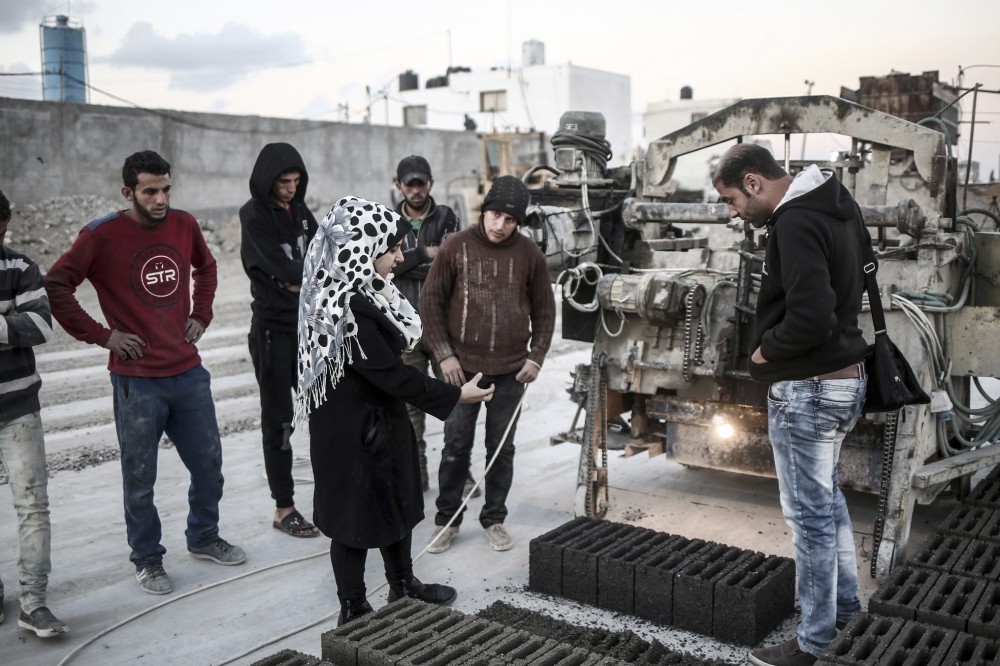 by Anadolu Agency Feb 02, 2017 12:00 am
Two female engineers in the Gaza Strip, where there are consistent difficulties in accessing construction materials due to the Israeli blockade, have produced incombustible briquettes made of wood or coal ash.

Meced el-Mişheravi and Ravan Abdullatif, who have recently graduated from the Department of Structural Engineering at the Islamic University of Gaza, said they aimed to solve construction material problems in Gaza with incombustible briquettes produced using wood and coal instead of stone and sand.

Speaking to Anadolu Agency, Mişheravi said they managed to produce this construction material, which is a first in Gaza, after dozens of tests. Mişheravi added that they sent a sample of the briquette they produced to advanced laboratories in Japan and received reliability confirmation that says the briquettes are suitable to use on construction sites. She said while the briquettes made of wood and coal are light, they are solid and flameproof.

Mişheravi emphasized that the weight of the briquettes is half of those that are made of stone and sand, and the cost is 30 percent less than the latter. "This is the product of intensive and diligent work with my friend Ravan for six months when we were in our last year at the university," she said.

Mişheravi said people have been facing various problems in Gaza, which has been described as "the world's biggest open-air prison." "We wanted to carry out a project that will contribute to ease at least one of the numerous problems in Gaza. One of our most significant problems is that construction materials such as sand, pebble stone and cement can't enter the region. Therefore, we decided to produce a briquette that doesn't need stone and sand," she said.

Mişheravi said they looked for an alternative product to cement in briquette construction and did not give up despite many unsuccessful attempts. "It was difficult to find this alternative material in Gaza, where Israel has limited access to construction materials, but we made it," she said.

Mişheravi stated that the briquettes were used for the construction of a building for the first time last August and that they received great demand afterwards. She also added that the idea had been embraced by the people and engineering circles in Gaza.

She noted, however, that the amount of wood and coal ash in Gaza can only meet one year's production. "We can think about another alternative later. Our project will not be limited to this. This is just the beginning of creative solutions for problems in the construction sector in Gaza," she said.

The two engineers are now preparing to visit Japan after receiving an invitation regarding their projects.
RELATED TOPICS