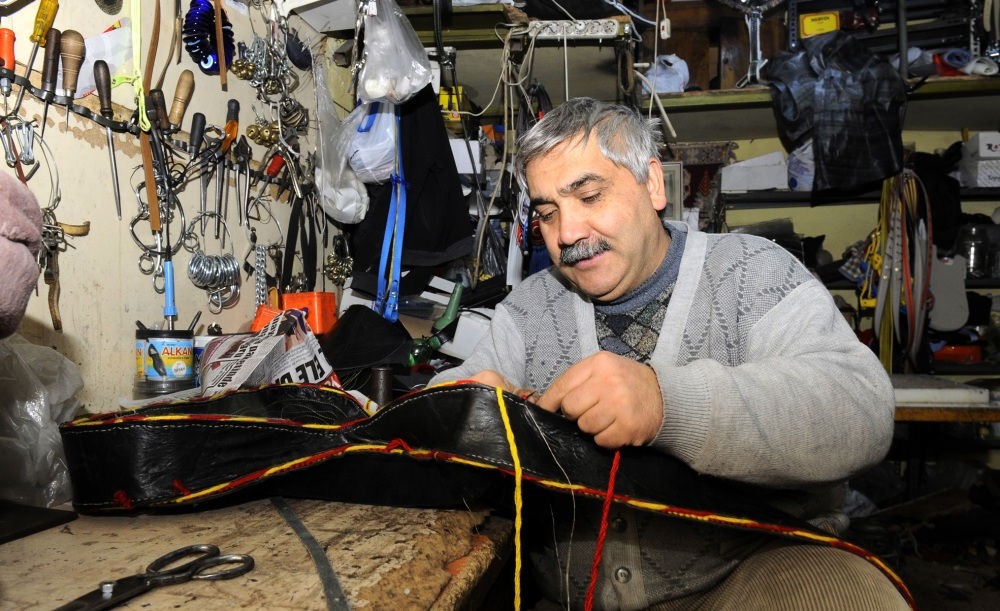 by Anadolu Agency Feb 03, 2017 12:00 am
Alaattin Bozkuşluoğlu, 51, is one of the last masters of saddlery in Turkey's Uşak. Once a popular craft among the locals, saddlery is now facing extinction. Advancing technology and a steady decline in interest, however, did not stop Bozkuşluoğlu from practicing his craft, which he picked up from his father along with their 58-year-old workshop.

Bozkuşluoğlu shapes genuine leather to make harnesses, leashes, belts, saddles and other decorative items for horses, as he tries to meet demands for his product from all over Turkey.

Speaking to reporters, the master saddler said he learned the dying craft from his father while working as an apprentice at their family workshop. And after his father passed away in 1981, Bozluşluoğlu took over the workshop.

"We are carrying on the profession of our ancestors," he said, despite the fact that he has often struggled to keep the work alive for almost 40 years.

"Saddlery used to be a very popular profession. The street where my workshop is located is called 'Saraç Sokak,' (Saddlery Street). All the shops on this street used to be saddlery workshops. As motorized vehicles became more and more common, all the shops closed down one by one. Yet, I am here, trying to keep this craft alive," Bozkuşluoğlu emotionally explained.

Claiming that saddlery was facing extinction, Bozkuşluoğlu said he was having a hard time finding an apprentice to teach the craft and that despite his age, he was forced to work between seven to 12 hours a day, depending on the workload.

"I have two sons and neither of them wants to become saddlers like me. I can't find an apprentice either. I am working alone mostly, although my brother helps me out from time to time to meet orders," he said.

"I am the last master saddler in Uşak. There are a few more saddler workshops here, but they stopped production. I inherited the workshop and the craft from my father and want to pass them down to my sons one day. I want my children to come to this shop and keep saddlery alive, even maybe just as a hobby. This workshop has witnessed 58 years of history. We are the last ring in the chain and I have to work really hard, although I am not getting any younger. It is not like I will change my career at this age," he added.

Bozkuşluoğlu can make anything related to leather saddles. He claimed that the number of orders has increased after the Turkish Jereed Horseback League kicked off recently.

Noting that the sport, which the Turks inherited from their ancestors, has kept his craft alive, the master saddler said that sprawling Jereed clubs have increased his work and he now supplies saddles to every part of Turkey from his workshop in Uşak.
Last Update: Feb 03, 2017 1:37 am
RELATED TOPICS