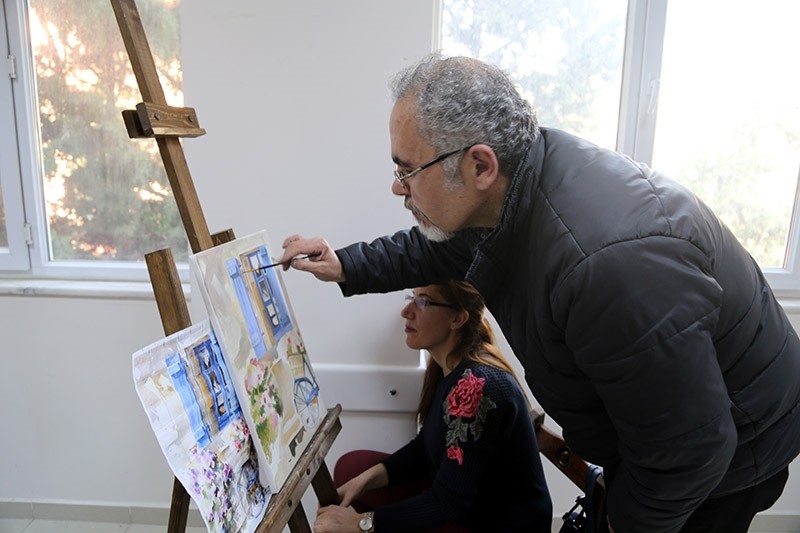 A Syrian refugee, who is a painter by profession, has been giving art lessons to Turkish students at a public education center in Turkey's southern Hatay province.

Selahattin Vişo, who was forced to leave Syria due to the ongoing civil war, fled to Hatay hoping for a better life. The painter is currently happy to share his artistic experiences with the Turkish people.

Vişo works as a teacher at the Antakya Nedime Keser Public Education Center and the Evening Art School.

The 50-year-old Syrian painter lost all of his relatives during clashes in Aleppo four years ago, and has since tried restarting his life in Turkey with nothing to hold onto but his passion for art.

Vişo said that he has been interested in the arts since his childhood, and was trying to encourage and inspire talented children and teens through art lessons during his time in Syria.

"I had to give up my art course, when the war started. I lost all my relatives and loved ones in the Syrian war. I decided to take refuge in Turkey and came to Hatay four years ago, as there was no one left in my country," the Syrian refugee said.

Ahmet Kocaoğlu, Director of the Antakya Nedime Keser Public Education Center and the Evening Arts School, said that the Syrian painter was employed three months ago, and that the center had organized a class especially for him.

The Director also emphasized that those attending Vişo's course really enjoyed working with him, adding that the current number of 20 students was slated to increase in the near future.