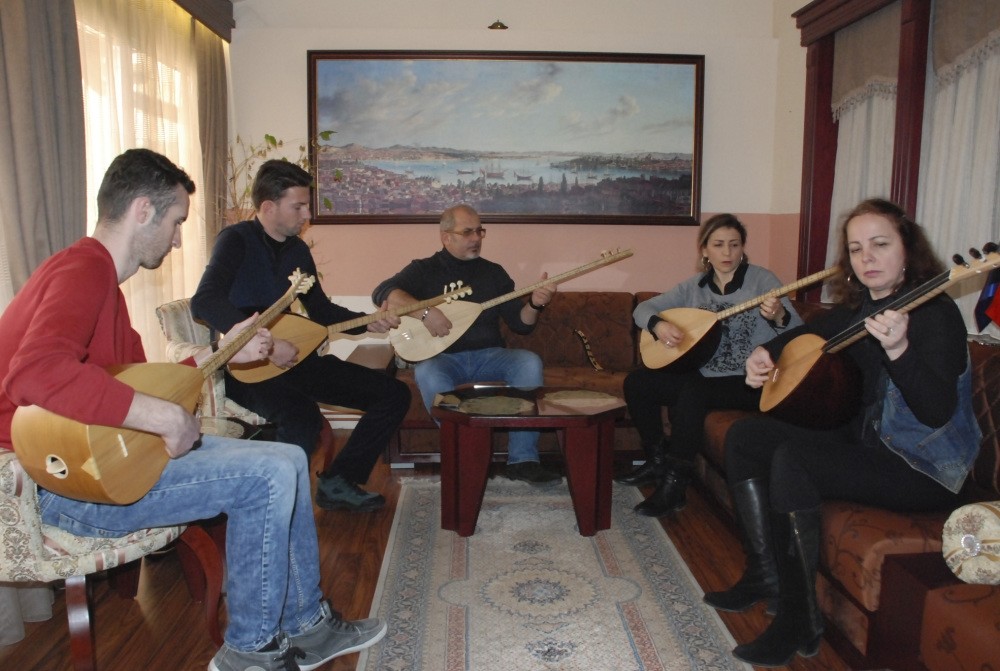 by Anadolu Agency Mar 01, 2017 12:00 am
The Yunus Emre Institute, which has been operating in Kosovo since 2011, has attracted a great deal of interest from the Kosovars this year, along with the courses it organized in different areas such as the bağlama, lute, and the traditional Albanian instrument çifteli, as well as Turkish language courses.

The institute, which has taken on the task of bringing Turkish and Albanian cultures closer together, offers the chance to learn traditional musical instruments from the two communities with bağlama and lute courses, as well as the double-stringed instrument the çifteli, in Kosovo.

Speaking to Anadolu Agency (AA) about the course given at the institute, Fatmir Makolli, the çifteli course instructor, said the çifteli is one of the most important musical instruments in Albania, adding that this new course has attracted "many applications," but that they can only accept a limited number of students. Stressing that the course is a good example of cooperation between the cultures of the peoples of Kosovo, Makolli said,:"Every instrument and person who uses that instrument undertakes the task of building a bridge between people. Thus, cultures are intertwined."

Gent Jetullahi, one of the trainees at the institute, stated that he has been learning Turkish for three years at the Yunus Emre Institute, and noted that he registered for the course because he loved playing the çifteli. Pointing out that it is "very nice" that they are providing courses on the çifteli, which is very important for Albanians, at a Turkish institute, Jetullahi said, "The çifteli course also shows that Turkish and Albanian cultures may be related to each other."

Ilir Berveniku, the instructor for the bağlama and lute courses, noted that these two musical instruments have an important place in Turkish culture and that Turkish and Albanian culture is introduced through the courses organized by the Yunus Emre Institute. Berveniku said the students who participated in the courses loved Turkish music and quickly learned how to play both instruments.

Bledon Kameri, who learned how to play both the bağlama and the lute at the institute, noted that music best describes cultures and helps connect them together. Stating that bağlama and lute courses are a good opportunity to get acquainted with traditional Turkish musical instruments, Kameri said, "I love Turkish music and instruments."

Mukadder Arıöz, a Turkish citizen who has been living in the capital of Pristina for five years, said these courses are good experiences for them. "People are making use of their free time here, and exchanging cultures."
RELATED TOPICS