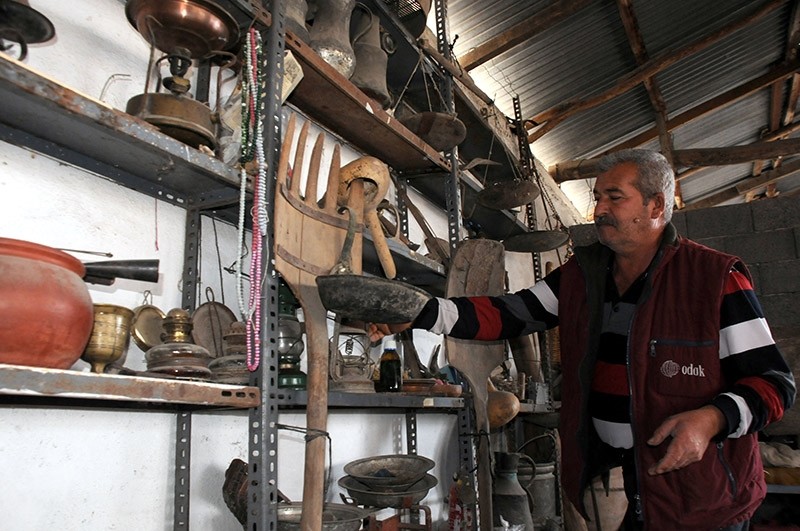 A Turkish man has transformed a traditional "huğ house," or thatched house, into a museum showcasing antique household and agricultural goods and highlighting the unique style of home, otherwise at risk of being forgotten.

Celal Düzler, a 59-year-old collector who lives in the southern Turkish village of Tozlu, has been accumulating some 500 objects including radios, wooden plows, copper household appliances, earthenware jugs, and tools for tinning and weaving, since he was nine years old.

The father of five and grandfather of eight began to exhibit the items to residents of the village and visitors to the region in the one-room traditional thatched house where he was raised.

Düzler explained to Anadolu Agency that what began as a childhood curiosity, turned into half a century of collecting objects.

"I started to collect old things in my childhood. I have always received support from my friends, the residents of the village, and my wife," he said.

Düzler exhibits the items in his village "huğ home," which was constructed in a traditional thatched style using grass, brush, and mud specific to the Çukurova region in southern Turkey. The museum also includes his vineyard and garden.

"The museum was created to pass on the goods used by our ancestors to future generations," Düzler said, "In particular, expats who come to the region on vacation show interest in my museum."

The village of Tozlu is located next to the ancient city of Anazarbus in Çukurova province, which is one of the most important historical areas of Turkey.