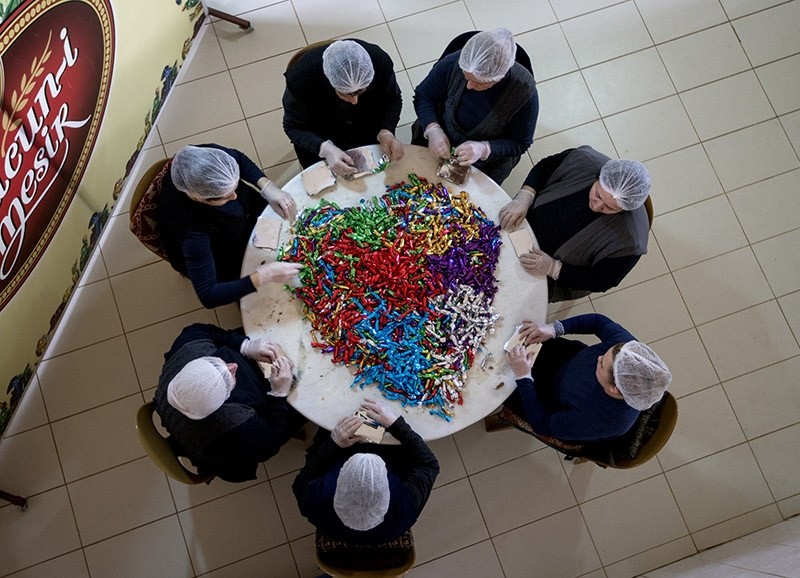 The 'Mesir Macunu' festival, a Turkish cultural event that has made the ranks of the UNESCO "Intangible Cultural Heritage" list, will take place from April 25-30 this year in the western city of Manisa. Women have already begun preparing the famous "mesir paste," using the same recipe from nearly five centuries ago.

The festival celebrates the recovery of Hafsa Sultan, the mother of Suleiman the Magnificent after she had fallen ill with an unknown disease. The physician, Merkez Efendi, prepared a paste mixture made of 41 different kinds of fresh spices and herbs in the form of a candy and presented it to Hafsa Sultan, who was subsequently cured of her illness.

The sultan then ordered the mesir paste be disseminated to the public.

For this year's festival, 15 women, with the support of the Mesir Promotion and Tourism Department, are preparing five tons of the paste in accordance with the original recipe.

Özlem Erdem, the General Secretary of the Association, told Anadolu Agency that the festival usually takes place from April 18-23, but was moved following a popular vote this year.

"Our mesir paste is produced entirely with the help of 15 female workers, without touching the hands of men. Only the marketing department has male workers," she said.

Proud to be using the same technique for centuries, Erdem said, "We are very careful to produce it in the most appropriate way, while adhering to the tradition. We use absolutely no technology in producing the mesir paste."

Erdem expressed that the paste is consumed not only in Turkey, but also enjoyed by people living abroad, "Exports continue to go to Germany and Russia. In addition, this year we received a request for a large amount of mesir paste from Dubai and our negotiations continue."

Serpil Özevcil, another woman who makes the mesir paste explained that she loves the health benefits of the 477-year-old sweet, "Our work is very enjoyable. I love the spice smell. I eat one mesir paste every day and I have not had the flu for 30 years. I don't remember any of my colleagues every getting sick either," she said.

After the paste has been prepared, the team of women will wrap the spicy candies into small pieces of paper. The mesir paste will then be blessed by 28 imams before being scattered from the top of the minaret and the domes of the Sultan Mosque in Manisa.

Crowds gather each year to catch the falling mesir paste, which they believe can grant their wishes for marriage, work and children in the coming year.