A stitch in time: Fashioning a life behind bars in Panama 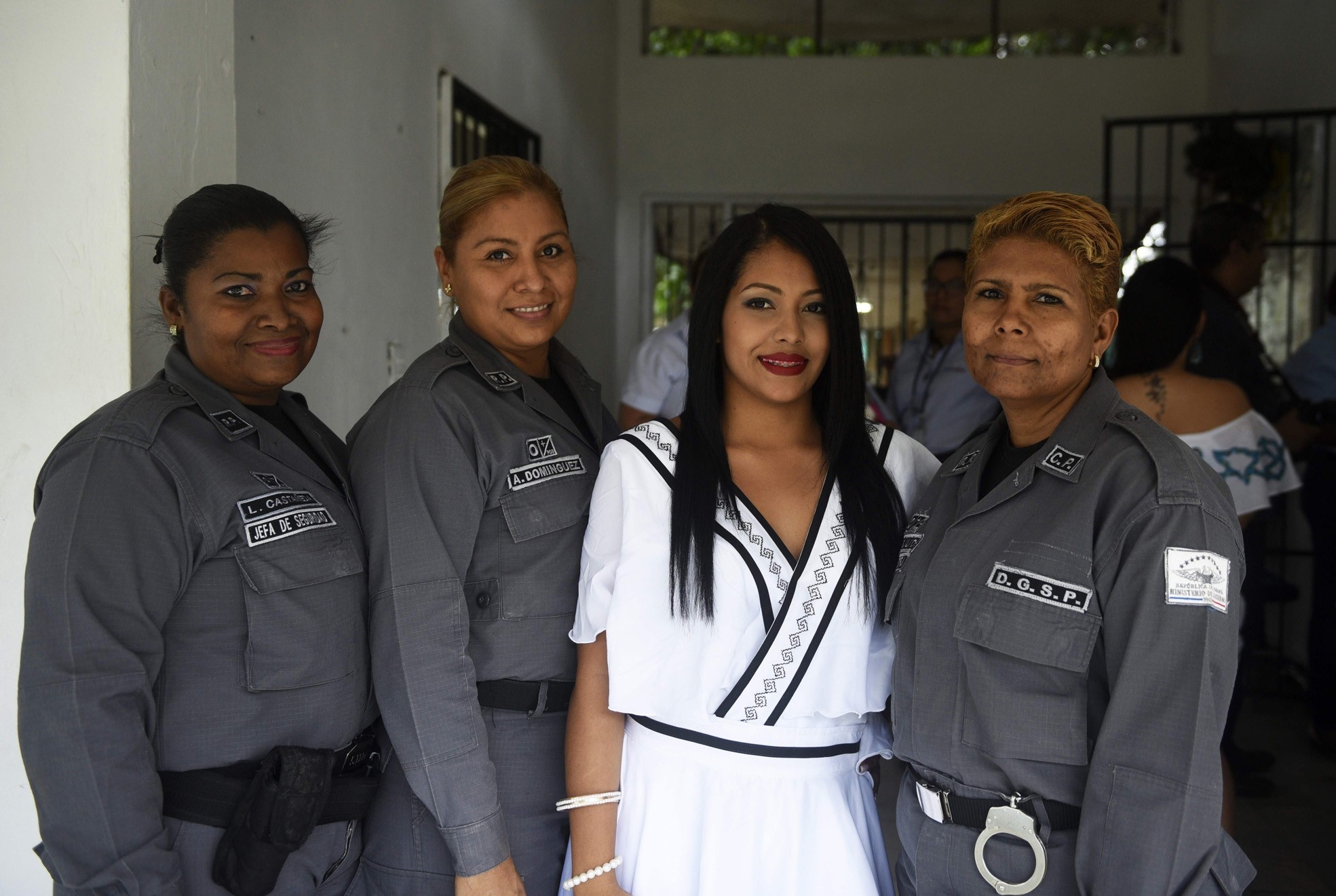 An inmate wearing a creation of the brand u201cIntegraArte,u201d poses next to guards at the u201cCecilia Orillac de Chiariu201d Womenu2019s Rehabilitation Centre in Panama City.
by Mar 09, 2017 12:00 am
In a small room in a prison on the outskirts of Panama City, Kathia Thomas carefully presses the screen on a digital sewing machine to choose the colors and embroidery on her next item of clothing.

Surrounded by other women, and by threads, patterns and a few religious images, Thomas, a 43-year-old mother of five children, is preparing the next collection behind bars.

She is part of IntegrArte, a brand of clothes, accessories and decorative objects, all made by inmates.

Thomas spends eight hours a day in the sewing room, mostly concentrating on embroidery. It goes toward reducing her three-year sentence for dealing drugs.

The Cecilia Orillac de Chiari penitentiary where she is kept holds 800 female prisoners, living in houses that feature kitchens, laundries, washrooms and dormitories.

"The problem inside is that it triggers many things. That's why you always need something to do to keep the mind occupied," she told the AFP.

"Making clothes frees you," she added.

Twenty-five women work for IntegrArte in the prison, while another 50 receive sewing lessons.

So far, the brand has brought out one collection, called Paraiso Etnico (Ethnic Paradise) which combines styles from the 1970s and 1980s with traditional handiwork typical to Panama.

"I love making clothes because it's a way for me to feel totally normal," said a Colombian inmate, Claudia Luna, although she added that in prison "we lack a lot of material and work basically with our fingers, with whatever we have around."

In all, four penitentiaries in Panama offer the same sort of social reinsertion work program, which is backed by the United Nations (U.N.) and which shaves time off sentences. Some 100 inmates take part.

In the Cecilia Orillac de Chiari facility, women produce clothes, hats, necklaces and purses. In the other three prisons, men work on household items and handicrafts.

Panama's vice president, Isabel de Saint Malo, said the involvement of the women in an economic activity was "fundamental to the efforts toward equal opportunities for men and for women."

The IntegrArte brand has been registered by the government, but a couple more steps are needed before it enters the market.

In the meantime, several ministers, including De Saint Malo, have been wearing its clothes, including those made by Luna, who is also locked up for drug trafficking.

"Dressing a vice president is the biggest thing I have ever done. Outside I would never thought that I would get to know a person like that," Luna said.

Hania Fonseca, the manager of IntegrArte, said, "Each item that we put out carries with it the history of the person who made it."

Locked away, the prisoners cannot hire models to try on their garb, so they do their own runway shows.

"This is an opportunity for someone locked up to show that they can become different, they can change and become better," said one of them, Teresa Santamaria, sporting an embroidered white top.

Another inmate, Stefani Edwards, sashayed down the improvised runway to show off a colorful Afro-Caribbean dress.

"Modeling was always my dream. But I never had the financial or family backing," she said. "I think when I get out of here that will be my goal."

Other inmates said the clothes-making and the modeling made them discover skills they never knew they had.

They also believed that giving themselves over to fashion allowed them to escape, for periods at a time, from the tough reality of living behind bars.

Thomas, behind her digital sewing machine, said: "There are women who, more than a gift or punishment, just need to have someone listen to them. Here, there are no bad women."
RELATED TOPICS