Printing press as a Turkish invention 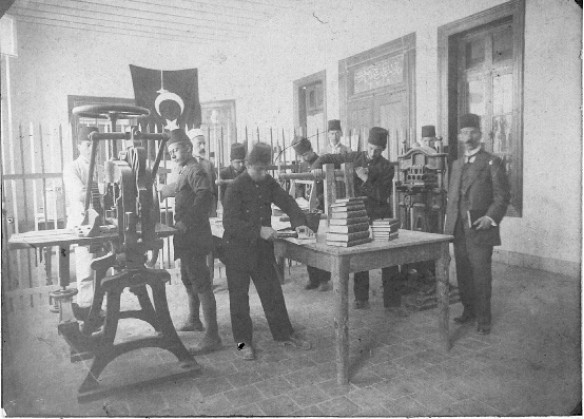 Students in Damascus print and bind books under the supervision of their teacher in the 20th century Ottoman Empire.
by Ekrem Buğra Ekinci
Mar 17, 2017 12:00 am

In 1620, Francis Bacon said that the world's most important inventions are the printing press, gunpowder and the compass. While these things originated in Asia, they were brought to Europe via Muslim Arabs and Turks. The printing press contributed largely to the spreading influence of the Renaissance as paper helped bring information, inventions and ideas from Europe, contributing to the development of science. This also led to the rise of nationalism while improving the European economy; in short, the printing press completely changed the characteristics of the Western world.

In the sixth century B.C., woodblock printing was used in China and Korea. Buddhist monks dominated the printing press during this period, while the Uighurs (a Turkic ethnic group from Eastern Central Asia) developed the very first printing press with adjustable letters, pressing double colors of black and red on leather, Chinese paper and silk In the 14th century, this type of printing press was used by the Mamelukes in Egypt.

The printing press was introduced to Europe as a result of the Muslim invasion from the south and the Turkish invasions from the north. The first books were printed in Europe in 1423, which were religious texts for common people and Latin grammar books. They were all printed on block printing press using wood embossing dyes. The metal printing press with adjustable letters was first used by German Johann Gutenberg in 1448 and Gutenberg was mistakenly known as the inventor of the printing press.

The Ottomans had been familiar with the printing press from very early times. In the 15th century, printing houses in Istanbul and other Ottoman cities were called "basmahane." However, they were run by the Greek, Armenian and Jewish Ottomans, who printed books in their own languages.

The first book featuring the Arabic alphabet was printed in the Italian town of Fono in 1514. Also, books in both Arabic and Persian were printed in Venezia, Rome and Vienna. These books were useful for merchants and missionaries. Ottoman Sultan Murad III allowed the free sale of Arabic, Persian and Turkish books that were printed in Europe across the Ottoman Empire in 1587.

Turkish people used to prefer handwriting rather than printed books as printed books didn't have the same artistic and elegant value that handwritten books had. Being keen on aesthetics, the Ottoman intellectuals used to enjoy books that had elaborate handwriting, shining ink, ornamented sides and elaborate covers because reading a book was not only a necessity but it also offered an enjoyable time. Also, there were many calligraphists who used to copy books in large amounts and very quickly. The widespread interest in handwritten books also created employment for these calligraphists. In fact, people who were keen on reading books belonged to a certain social class and the same rule applies even today.

The first printing press that belonged to the Muslims was opened by İbrahim Müteferrika in 1727 during the Tulip Period, when the Ottoman industrial revolution began. The printing press in Istanbul opened only 34 years after the first printing press was established in New York. Said Efendi, who was the son of Yirmisekiz Çelebi Mehmed Efendi (an Ottoman statesman), accompanied his father during his visit to Paris as his stenographer and admired the printing house in Paris and assigned İbrahim Müteferrika to build a similar one.

İbrahim Müteferrika submitted a report to the grand vizier, in which he said that many Islamic books were lost during the destruction that Andalusia and other Muslim lands suffered from, and added that there were not enough calligraphists to copy large and comprehensive books faultlessly, thus emphasizing the necessity and benefits of the printing press. He said knowledge could spread farthest via the printing press, which produced a more readable structure. As the books wouldn't be damaged by water, it was a profitable job and the prices of books would decrease. He also added that books printed by Europeans in the Arabic alphabet had lots of mistakes and the printing press would boost the Ottoman Empire's reputation.

The then-Sheikh al-Islam (the highest-ranking religious official in the Ottoman Empire) gave a fatwa, saying that the printing press was not contrary to religion; instead, it was a useful invention. However, there was a false claim made during the Republic period that said, "While Europe already invented the printing press and started to print books, the religious authorities in our country prevented us from using it, saying it was against the religion, and caused a slowdown in our progress."

The death of the pencil

The Ottoman Sultan Ahmed III issued a royal decree in 1727 that allowed the publication of non-religious books as well. Said Efendi and İbrahim Müteferrika founded a labor-capital company and opened the first printinghouse in İbrahim Müteferrika's mansion in the Üsküdar district of Istanbul. They also had four expert proofreaders. First printed book in December 1727, a two-volume Arabic-Turkish dictionary called "Vankulu opened with its first volume of 666 pages while the second volume had 756 pages. In total, 1,000 copies were printed in size 18 typing size."

During this period, calligraphists, who used to earn a living by writing and copying books, protested Babıali (Sublime Port), putting their pencils in coffins. Following this protest, the writing of religious

books was assigned to calligraphists again. Baron de Tott, who was in Istanbul, said the printing house was closed because of lack of interest and the orientalists slammed the Ottomans for it. An Italian ex-Jesuit Giambattista Toderini, staying in Constantinople between 1781 and 1786, criticized Baron de Tott's false accusations raised against the printing house. In fact, the printing press reopened at the earliest opportunity although its services were disturbed for a while during the Russo-Ottoman War.

When Said Efendi became grand vizier a few years later, he handed over the printing house to his partner. After İbrahim Müteferrika died in 1745, Qadi İbrahim Efendi, who was a religious functionary and also his aide and son-in-law, ran the printing house. Following the Russo- Ottoman War, historians Raşid and Vasıf Efendi bought the printing house In 1783 when they heard the French embassy wanted to buy it at a very high price and didn't want to hand it over to foreigners, even printing French books.

The Müteferrika's Printing House, which was becoming older and older and whose letters became dysfunctional, made a pause for its activities in 1798.Then, the Ottoman Empire founded three printing houses; "Mühendishane,""Üsküdar" (Dârüttıbaa) and "Takvimhane-i Âmire," which were then became printing houses run by the state. Sultan Mahmud II allowed the printing of religious books as well during his reign.