Palestine's message given to world by 10-year-old journalist 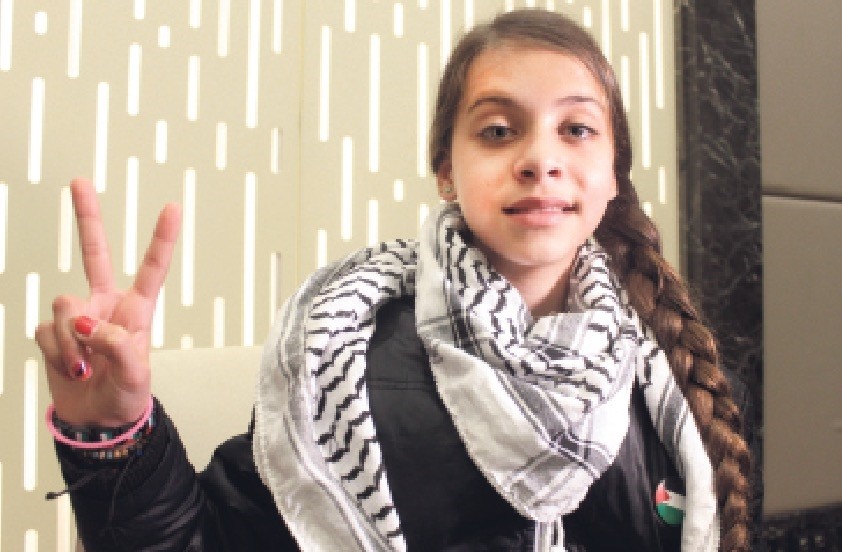 Ten-year-old Palestinian journalist Janna Jihad makes a peace sign during an interview following the International Benevolence Awards ceremony in Istanbul.
by Anadolu Agency Mar 20, 2017 12:00 am
Janna Jihad, a 10-year-old Palestinian girl from the Nabi Saleh village in the occupied West Bank, has been dubbed as the youngest journalist in the world after producing videos on Israeli checkpoints, anti-occupation marches and Israeli violence against Palestinians.

"I'm trying to send a message to the world that the Palestinian children are suffering from injustice," Janna told Anadolu Agency (AA) in an interview.

"This land is called Palestine and its people are Palestinians, not terrorists," she said. "We are defending our rights taken away by the Israeli occupation."

Born in the U.S., Janna reports both in Arabic and English on her Facebook page, which has around 250,000 followers. She says that she seeks to end the injustice done to Palestinian children in the occupied territories.

"Children of Palestine are like other children around the world, who need education, health and their right to live as free people," Janna said. "Every day, we see the blood of our relatives being shed at Israeli checkpoints and our friends being crushed while playing," she said.

Janna cannot forget the death of her uncle and his friend in an attack by Israeli settlers on her village.

"We were in farmlands when we were attacked by the settlers," she recalled. "Israeli soldiers also fired teargas canisters, which caused my grandmother to fall sick."

The young journalist, who started documenting Israeli violations since she was seven, said Israeli restrictions were making their life harder.

"My daily journey to school takes more than two hours, instead of 20 minutes, because of Israeli barricades and checkpoints," she said.

"I am very proud that I have managed to deliver Palestine's message to Turkey and the world," Janna said.

"Though I am happy that I won the award, I am sad that many children are being killed [in Palestine]," she said.

The International Benevolence Awards are given by Turkey's Presidency of Religious Affairs, with a view to celebrate goodwill around the world.

"We appeal to the world to wake up and watch what's happening to Palestinian children," Janna said.

"We want freedom, peace and justice. We want a world free of killing, blood and destruction. We will not lose hope and one day our land will be liberated and the enemy will leave."
RELATED TOPICS