Bella Hadid says she's 'proud to be Muslim, daughter of a refugee' 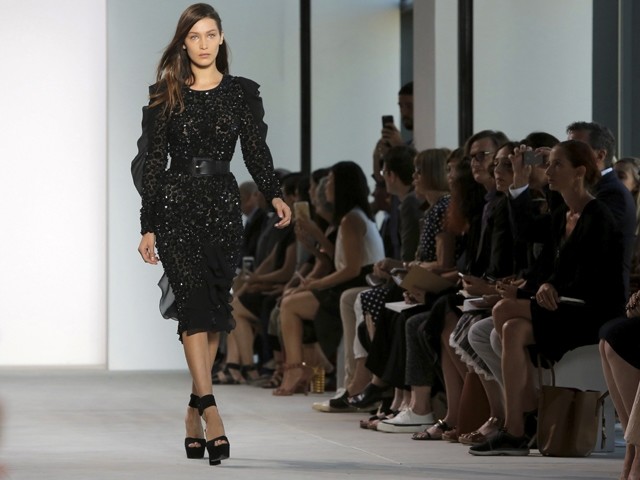 U.S. model Bella Hadid has spoken out against President Donald Trump's attempted travel bans, saying she is proud to be a Muslim and the daughter of a refugee.

Twenty-year-old Hadid is one of the most photographed and in-demand models of the moment, dominating the catwalk in the fall/winter 2017 fashion season in New York and Europe.

She is the younger daughter of Palestinian-American real estate developer Mohamed Hadid, who emigrated to the United States when he was a teenager, and Dutch-born model Yolanda Hadid.

Older sister Gigi is a supermodel and younger brother Anwar is another model.

"My dad was a refugee when he first came to America, so it's actually very close to home for my sister and brother and me," Bella told fashion magazine Porter of Trump's attempted travel bans.

"He was always religious, and he always prayed with us. I am proud to be a Muslim," she added.

Her father was born in Nazareth in 1948, and lived in the Middle East before moving to the United States as a teenager.

In January, the Hadid sisters marched against Trump's first attempted travel ban, which sought to restrict visa holders from seven Muslim-majority countries until it was slapped down by the judiciary.

They were photographed in New York carrying a poster that said "We are all Hindus, Buddhists, Muslims, Atheists, Christians, Jews."

The Trump administration is appealing against the decision of a U.S. federal judge to freeze a revised travel ban, which had been due to come into effect last month.

"I come from a really diverse background," Hadid told Elle magazine in February about her decision to take part in the march.

"We shouldn't treat people as if they don't deserve kindness just because of their ethnicities. It's just not right," she said.

Hadid, ex-girlfriend of singer The Weeknd, has appeared this year in a string of lucrative campaign ads for the likes of Bulgari, DKNY and Moschino, and has amassed nearly 12 million followers on Instagram.

Her sister Gigi graced the cover of the first edition of Vogue Arabia wearing a jewel-encrusted veil.