April the giraffe gives birth in NY zoo before online audience of 1.2 million 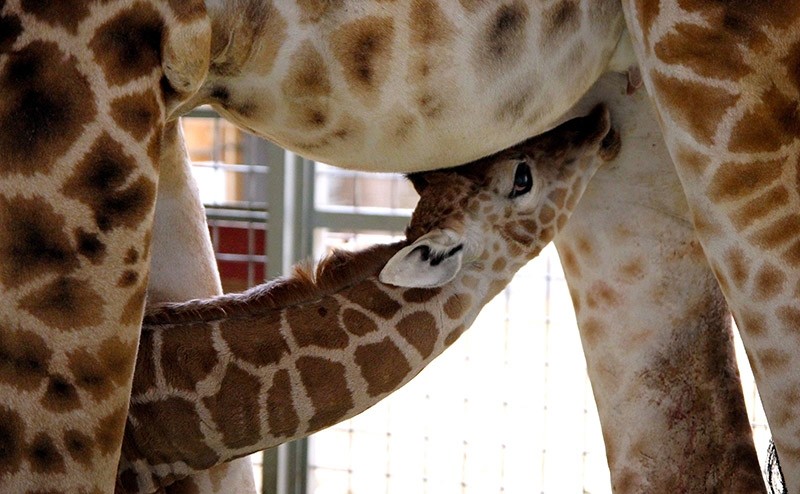 At long last, April the giraffe gave birth on Saturday to a long-overdue calf, to the delight of hundreds of thousands of people who have been monitoring a live cam feed from her pen in a New York zoo in anticipation of the grand event.

April, who was due to give birth in January or February at Animal Adventure Park in Harpursville, in western New York, was pregnant for at least 16 months, compared with the typical gestation period of 15 months, according to zoo officials.

April's celebrity and the public fascination with her unborn calf blossomed when the zoo began providing a live YouTube stream in February.

At least 1.2 million people watched the Adventure Park's YouTube streaming of the event. A logo on the feed quickly changed from ToysRUs to BabiesRUs following the birth.

The YouTube page on Saturday showed April going into labor and the hooves of the baby first emerging from the standing mother. Afterwards, the spindly 6-foot-tall (1.83-meter) calf, estimated to weigh as much as 150 pounds (68 kg), was seen standing at its mother's side.

April has her own website and even an apparel line. A GoFundMe fundraiser page that initially set a goal of $50,000 sat at more than $125,000 on Saturday morning. The money will be used for the care of the animals.

A contest will be held to decide on a name for the calf.

The park's livestream was briefly interrupted in February when YouTube pulled the feed after someone reported the images contained explicit material and nudity. Jordan Patch, owner of the Animal Adventure Park, blamed "a handful of extremists and animal rights activists" for the interruption.

The wait for the giraffe became an anxiety-ridden experience for some. A Farmington, New Hampshire, songwriter even posted a music video on YouTube called, "I'm Going Crazy Waiting (For A Giraffe)."

The reaction on Twitter was ebullient and hopeful: "We did it, internet! We had a giraffe baby together;" ''Everybody sticking their neck out for this baby giraffe;" and "On a day where "mother of all bombs" is a trending phrase, I love how the world unites over the birth of a baby giraffe."

Classed as vulnerable by the International Union for Conservation of Nature Red List of Threatened Species in 2016, giraffes are the world's tallest mammals. The species is usually found in dry savanna zones south of Africa's Sahara desert.