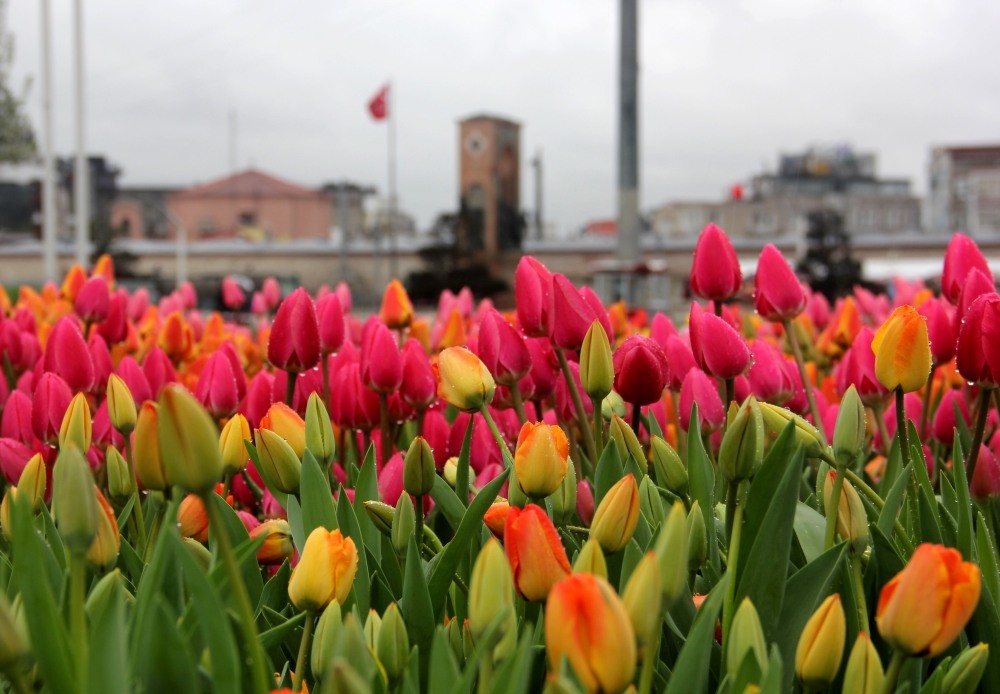 by Compiled from Wire Services Apr 19, 2017 12:00 am
There are tulips everywhere again as Istanbul's 12th Tulip Festival kicks off to celebrate the flower that adds color to the concrete jungle of the country's most populated city.

The festival, formally launched by the municipality at Emirgan Grove where the ubiquitous flower is planted in diverse colors, offers a late welcome to spring although April showers occasionally bother the city's residents and visitors.

In the early hours of yesterday, workers planted thousands of tulips hauled from the central city of Konya at Taksim Square, the heart of the city. Some 160 species of the flower, which was wildly popular in the city's Ottoman era, are on display at the square where passersby rush to take selfies against the backdrop of the flowers.

Apart from the prominent display of tulips all across the city, particularly in groves giving a respite for Istanbulites from the hubbub of daily life, the festival will also focus on events related to the flower. A painting exhibition was launched yesterday at the Emirgan Grove while a tezhip (illumination art) exhibition concentrating on tulips will open at Taksim Cumhuriyet Art Gallery today. The municipality is also organizing a photography contest where the best photo of Istanbul's tulips will be awarded.

Tulips have a significant place in Turkish culture and since the 12th century, they have been widely used in Turkish and Islamic arts. The flower, frequently mentioned in the poems of famous mystic Mawlana Jalaluddin Rumi - who lived in Konya where Istanbul Tulip Festival's flowers were brought from - was a common theme in Turkish literature. However, its popularity peaked in the 18th century with the newfound interest of the Ottoman elite in the flower that coined the phrase "Tulip Era."

Speaking at the launch of Tulip Festival, Istanbul Mayor Kadir Topbaş said as part of the annual event, about 26.5 million tulips were planted across the city. "For a month, the Tulip Festival will contribute a lot to Istanbul. It is a boost for the economy as tens of thousands of people worked as tulip growers. It is a boost for tourism as both local and foreign tourists visit Istanbul to see the tulips," he said.
RELATED TOPICS