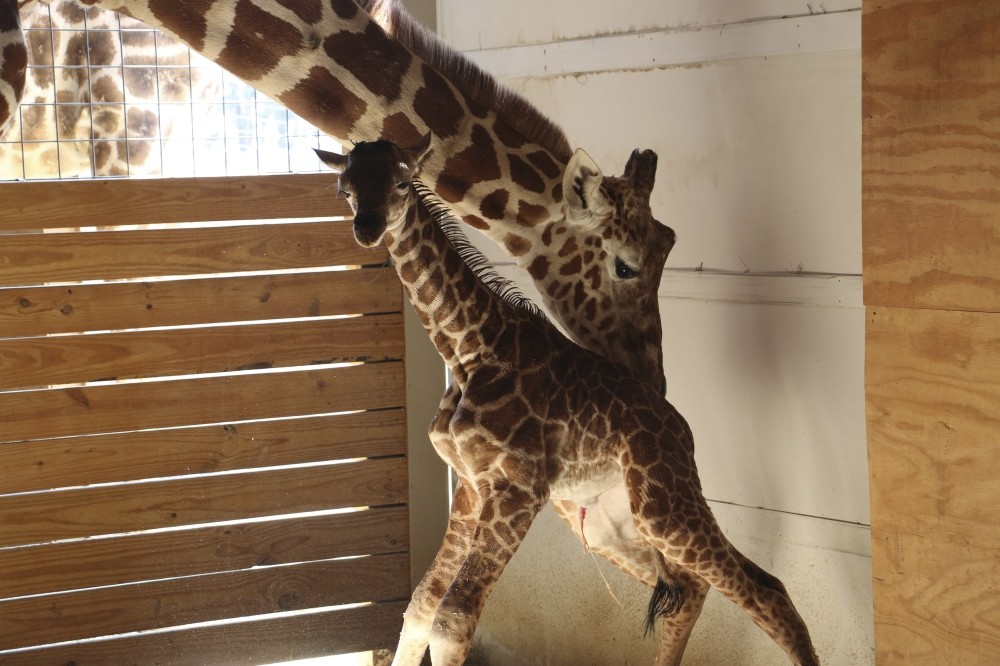 April helps her newly born unamed baby giraffe stand at the Animal Adventure Park, in Harpursville on April 15.
by Associated Press Apr 25, 2017 12:00 am
April the giraffe has brought a bundle to a tiny zoo in rural upstate New York, thanks to a YouTube video livestream of her pregnancy and birth of an incredibly cute calf that has riveted viewers around the world.

Owners of the for-profit Animal Adventure Park won't say exactly how much they've pulled in from all April-related ventures, but internet marketing experts conservatively estimate the haul in the hundreds of thousands of dollars.

The money will be used for zoo upkeep, wildlife conservation in Africa, and a favorite cause of the zoo's founders - local children with unexpected medical expenses, the park owners say.

"The monies are going to allow the park to continue to grow and improve," said Jordan Patch, who started the 20-acre zoo with his wife four years ago in Harpursville, about 130 miles northwest of New York City. "But also the money will help support our conservation efforts in Africa, so we're actually providing tangible results for wild giraffes."

The ventures include the Toys 'R' Us-sponsored YouTube stream, monetized text messages, a clothing line and the sale of T-shirts, caps and fuzzy toys.

All Patch would say for sure, moneywise, is that a Gofundme campaign has raised more than $150,000 for the care of April, her mate Oliver and their male calf, as well as upgrades to their exhibit space. And he expects 150,000 park visitors - twice as many as last year - to pay $11-$13 to see the giraffe family along with the park's 200 other animals, including alligators, monkeys and zebras.

Neither Patch nor Toys 'R' Us, which features a giraffe as its corporate mascot, would talk about how many dollars were attached to April's video stream. After coming online Feb. 23, it has become the second most-watched livestream in YouTube history with more than 232 million views and 7.6 billion minutes of live watch time.

Digital media analysts say the money alone may be beside the point.

"Every marketer dreams of getting something that will go viral," said Allen Adamson of Brand Simple Consulting, which helps companies define and market their brand. "The real value is the way the organization has been cemented in millions of people's minds in a compelling way. You can't buy advertising like that."

Still, some YouTube followers have griped about some of the park's approach to the animal's birth, such as the $5 charge to sign up for giraffe news text alerts and $1 to vote for a baby name that will be announced May 1. The park also is selling $20 "Hello Baby" tote bags, $16 "April's View Crew" T-shirts and a $50 three-pack of giraffe prints. And Toys 'R' Us, which is driving traffic to its own Facebook page with exclusive video visits to the park, is coming out with new giraffe plush toys based on April's little family.

Patch said the proceeds will be split among park improvements, a contribution to the Giraffe Conservation Foundation and a fund to help local children with unexpected medical expenses. The latter is named for Patch's baby daughter Ava, who has a rare form of epilepsy.

Patch didn't expect his pregnant giraffe would become a global sensation. The livestream was intended to free up park staff to tend to their daily duties like feeding and poop-scooping rather than fielding inquiries about April's pregnancy. It ended up doing the opposite, bringing a flood of questions, comments and sometimes criticism from far-flung fans and followers.

As for the 6-foot-tall baby, after he's weaned from his mother he will be sent to another zoo to help sire more offspring.