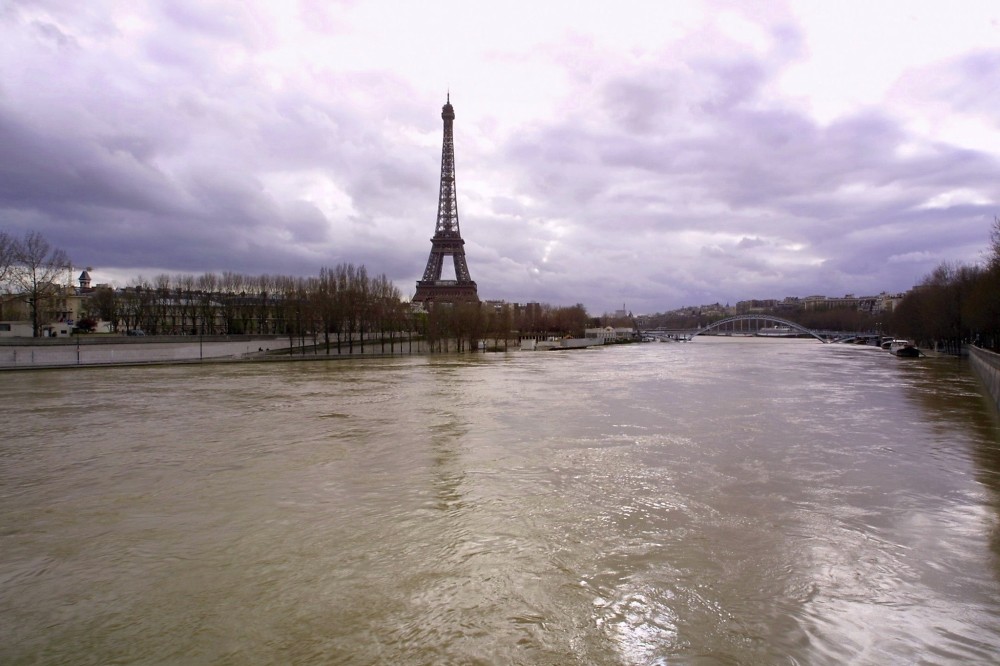 Scientists say flooding is a growing risk for cities, with Paris due for its next one-in-a-hundred-years flood.
by May 02, 2017 12:00 am
Faced with exploding populations and steadily rising temperatures worldwide, cities must make haste in reinforcing defenses against climate change - induced flooding and heat waves, experts warned this week.

City temperatures are forecast to shoot up in the coming years, exposing inhabitants to killer heat spikes, while rising sea levels and river flooding threaten homes, drinking water, and transport and electricity infrastructure.

Cities are vulnerable to a unique risk called the "urban heat island" (UHI) effect - their concrete surfaces retain more of the sun's heat than undeveloped areas, scientists explained at a meeting of the European Geosciences Union (EGU) in Vienna.

By midcentury, if planet-warming fossil fuel emissions continue unabated, city temperatures in Belgium could exceed today's heat-alert levels by as much as 10 degrees Celsius (18 degrees Fahrenheit) for 25 days each summer, according to one research paper.

And floods, a major risk to Europe's dense urban settlements, will become more common because of an increase in freak rainstorms, as well as sea level increases caused by polar ice melt and warmer ocean water expanding.

In flood-prone southeast Asia, precipitation is set to increase by 20 percent this century, one researcher said in Vienna.

The stakes are especially high given the projections for expansion of urban areas, which are often ill equipped to deal with nature's vengeance.

Already, more than half the world's population live in cities. By 2050, 80 percent of people in rich nations, and 60 percent in developing states, will be concentrated in built-up areas, according to recent calculations.

This corresponds to the appearance of a settlement of a million inhabitants somewhere on the globe every week for the next 40 years.

Occupying only a small portion of Earth's available land, cities are responsible for 80 percent of all energy consumed and generate over 60 percent of the planet-warming greenhouse gases emitted when humans burn fossil fuel for heating, power and transportation.

In spite of efforts to curb emissions, the planet has already warmed about 1 degree Celsius on average from pre-Industrial Revolution levels.

Many scientists say the planet may be on track for 3 degrees Celsius of warming or more, exceeding the 2-degree cap politicians set in Paris in 2015.

This means cities must act now to shore up their defenses against impacts that can no longer be avoided, French climatologist Herve le Treut warned at the annual EGU gathering.

"The ways cities are built is not optimal" for today's climate reality, said Daniel Schertzer, a hydrometeorologist at the engineering school Ecole des Ponts ParisTech.

"Historically, humans have settled near water, thinking of its usefulness, but not of the risk! Cities were conceived without taking geophysics into consideration, now they are discovering that nature is complicated, not just good," he told AFP on the sidelines of the conference.

Paris, for example, is due for its next so-called one-in-a hundred-year flood.

The last major Paris flood, in 1910, saw the Seine river rise 8.62 meters (28.3 feet), shutting down much of the City of Light's basic infrastructure.

"It... will occur some day," said Sebastien Maire, who goes by the title of Paris's chief resilience officer.

And when it does, research shows it will cost about 100 billion euros ($109 billion) and some 400,000 jobs, and harm France's economic output for five years afterwards.

A flood of this level would damage the underground metro system to such an extent that "it will take five to 10 years to rebuild," Maire said.

Paris is vulnerable because much of its critical infrastructure lies near the Seine - including power distribution, heating, telecommunications and fresh water networks.
RELATED TOPICS