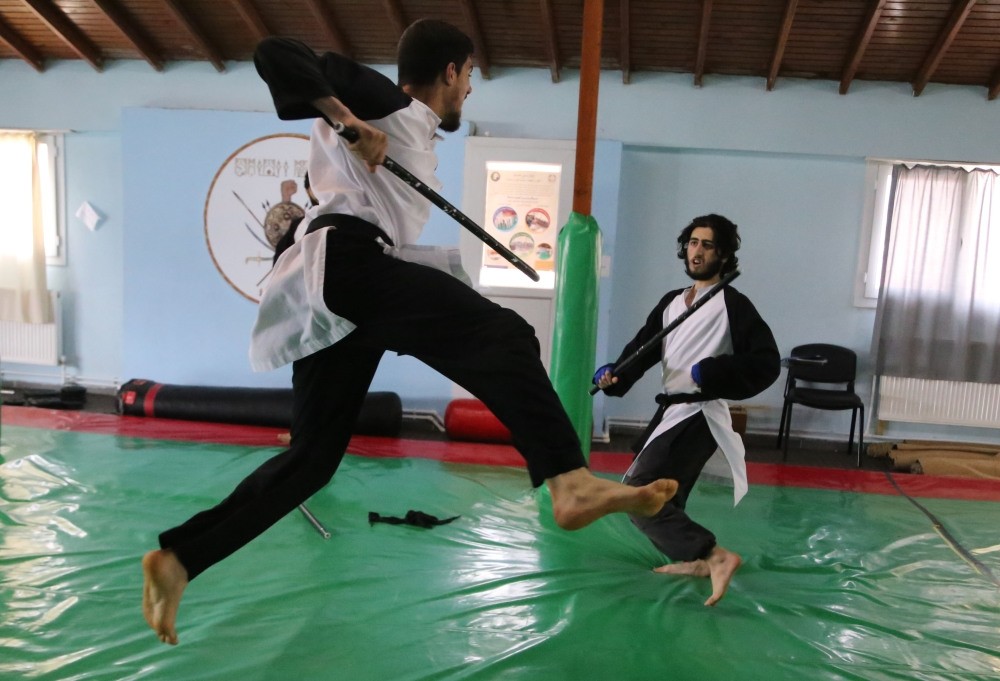 by Anadolu Agency May 09, 2017 12:00 am
The former Manager of the Syrian Taekwondo National Team, Naser Nesep, who is sheltering in Turkey due to the Syria's ongoing civil war, has come up with a new martial art that blends taekwondo and Kung Fu with swimming, riding and archery under the guidance of Islam.

Nesep, 34, was very interested in martial arts when he was a little boy. As a result, he joined the Syrian National Team for taekwondo and won numerous titles in national and international organizations before becoming the chief manager of the national team.

After the start of the Syrian civil war, Nesep came to Turkey and began teaching martial arts to young students. The Syrian sportsman is currently teaching taekwondo in a sports center in the border city of Hatay. "I was interested in taekwondo and Kung Fu. However, I began to do freestyle martial arts in 2011 and started to focus on creating a new branch of martial arts. The new martial art that I have developed is about power, strength and self-defense," Nesep explained.

Nesep believes that other martial arts can cause permanent injuries, yet the branch that he has created carries little risk. "Far Eastern martial arts' techniques include striking the face with a stick. Hitting the face is against Islamic rules. Hence, I have blended Far Eastern martial arts with Islamic rules and traditional sports. An Islamic teaching says, 'Teach your children how to ride a horse, swim and shoot an arrow.' As a result, I have included horseback riding, archery, swimming and swordplay in the new mixed martial art that I have developed," he explained.

Nesep teaches this new martial art to his young pupils in stages according to its level of difficulty. During Nesep's training, students not only learn about martial art tactics but also about important figures in history, such as Saladin and the Ottoman Sultan Mehmed the Conqueror. "It is important for children to know how these people founded strong empires, which ethical rules they followed and how they fought on the battle field," he added.

There are a total of 27 students with black belts in Nesep's sports center. Last summer, the students participated in local competitions and won titles. Currently, Nesep and his students are trying to have this new martial art recognized worldwide.
RELATED TOPICS