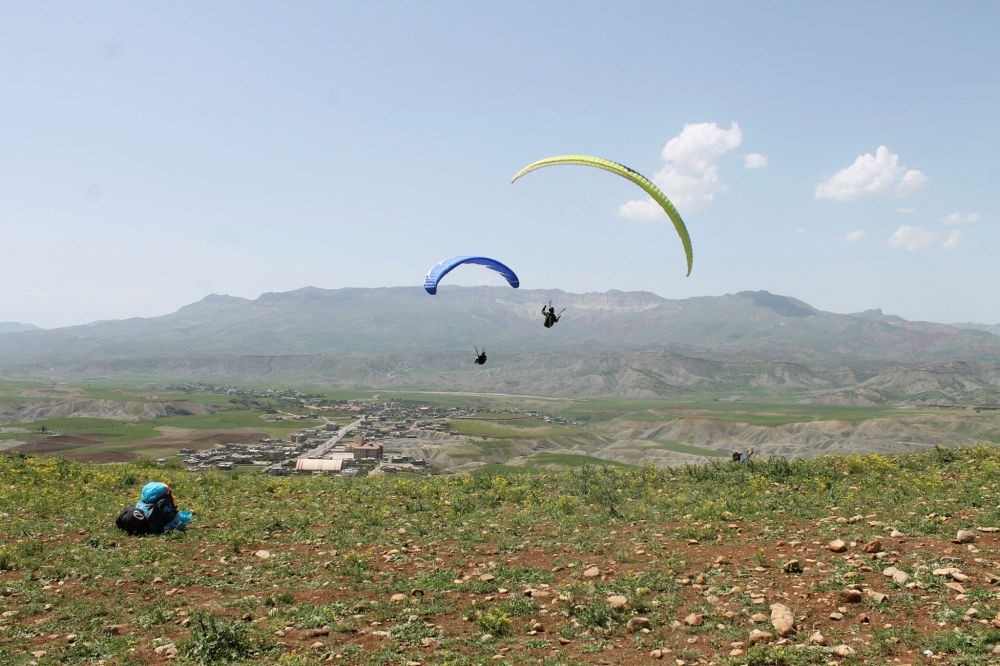 by Daily Sabah May 10, 2017 12:00 am
The mountains in Şırnak, a poor southeastern town with a predominantly Kurdish population, have long been synonymous with terror.

It was on those mountains that the militants of the PKK terrorist organization hid and engaged in clashes with the Turkish army and carried out attacks on its outskirts in the winter.

Since anti-terror operation that began last year more or less ended the PKK's presence in Şırnak, a bunch of paragliding enthusiasts saw a chance to bring the pastime, otherwise popular in southwestern Turkey, to the mountains there.

Twelve paragliders from the local Şırnak Nature Sports and Aviation Club made it to the top of the cliffs yesterday at İkizce village, some 20 kilometers from central Şırnak to experience paragliding without fearing terror.

Shouts of excitement echoed on the cliffs instead of gunshots and explosions that were once common in the area. The paragliders now plan to fly off the cliffs of Cudi and Gabar, two other mountains where the PKK, for decades, hid out and attacked the Turkish army.

"We have six experienced paragliders and six trainees. We look forward to organizing more events like this," he told Anadolu Agency reporters.

"Şırnak is a suitable location for paragliding and we expect tourists to flock to the city as safety prevails. We already have paragliders from other cities expressing interest in flying here. With more visitors, we plan on holding contests here," he said.

Paragliding is an expensive hobby that Şırnak's impoverished youth can't afford but Oğrak said they will hold paragliding projects for the disadvantaged youth. Their next step will be an aviation school at Mt. Cudi.

Deniz Adir, a paraglider, says with its natural beauty, Şırnak is a great location for other sports as well, such as rafting and its geography was suitable for trekking tours.