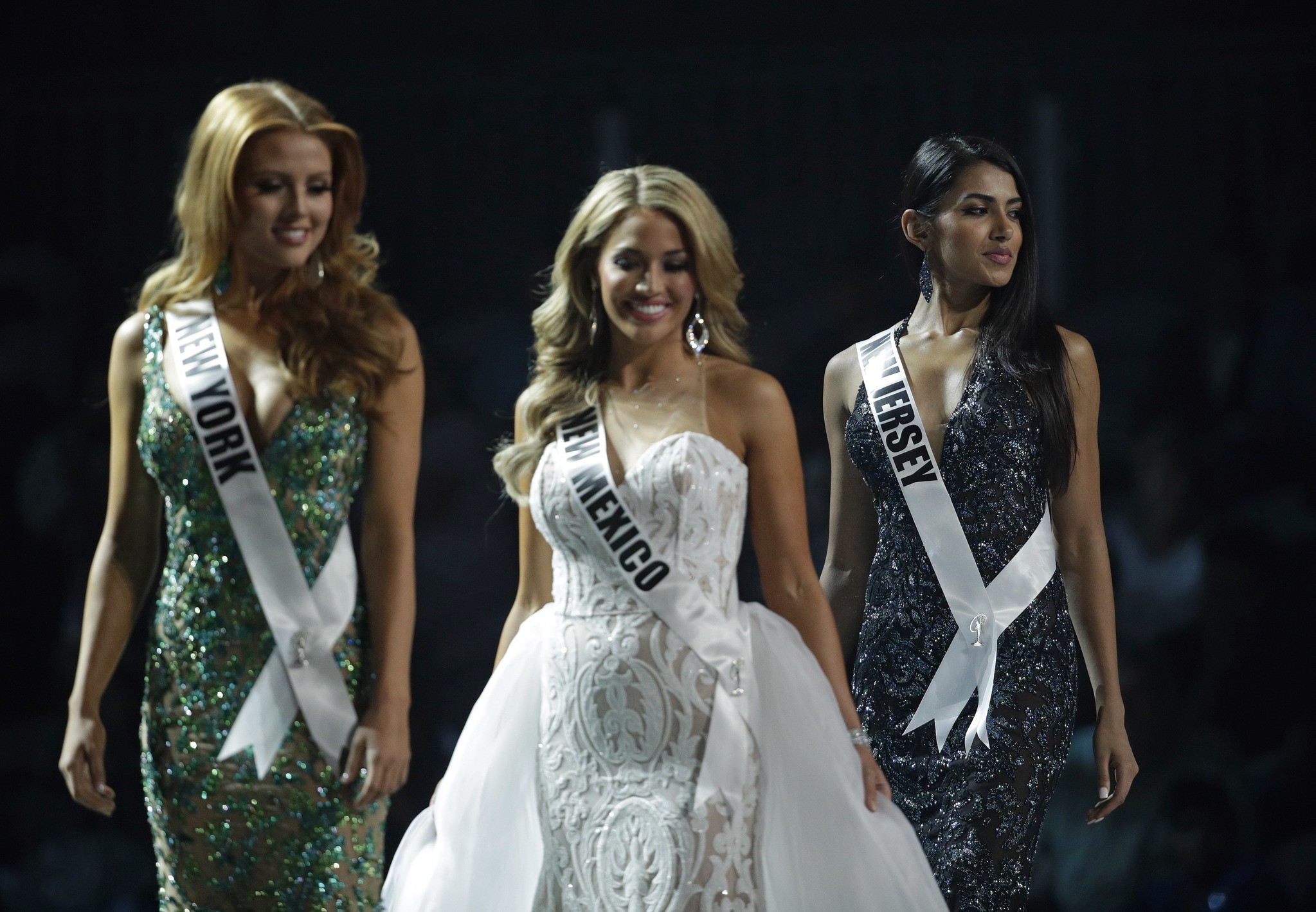 In this May 11, 2017, photo, Miss New Jersey USA Chhavi Verg, right, competes during a preliminary competition for Miss USA in Las Vegas. Very emigrated from India with her parents. (AP Photo)
by Associated Press May 12, 2017 12:00 am

Five of the contestants vying for the Miss USA title have a message to immigrant girls and women watching the pageant this weekend: Set goals, work hard and don't stay in the shadows.

The contestants know what they are talking about as they were all born in other countries and immigrated to the U.S. at young ages as their families pursued their versions of the American Dream. The women are now all U.S. citizens.

"I want them to see that anything is possible if you work hard," said Linnette De Los Santos, who immigrated with her family from the Dominican Republic when she was 5 years old. "As Miss USA, I would love to be able to be that inspiration for our immigrant community. If I would have stopped following my dreams and working hard towards what I wanted, I wouldn't be sitting here as Miss Florida USA or in law school ready to become an immigration attorney."

Their remarks stand in stark contrast to the scandal that enveloped the pageant in 2015, when part owner and now President Donald Trump offended Hispanics when he made anti-immigrant remarks in announcing his bid for the White House. Trump co-owned The Miss Universe Organization with NBCUniversal, but the network and the Spanish-language broadcaster Univision quickly cut ties with him, refusing to air the show. Trump sued both networks, eventually settling and selling off the entire pageant to talent management company WME/IMG.

Wellentin and her family left the Philippines over safety fears when she was 2 years old. Their first taste of American life was in the small community of Enderlin, North Dakota, where she and her siblings felt isolated.

"Nobody wanted to talk to me at all. I came home one day and I asked my dad 'Why am I so different? Why isn't anyone talking to me?'" Wellentin said. "My dad told me, 'You know, you are not different. You are very unique yourself. You have to be strong and really accept this negativity from other people and have it motivate you.' I still keep that in my mind."

Their situation improved when they moved to the larger and more diverse Fargo, North Dakota.

Wellentin, 24, who wants to be a middle school teacher after she completes a student-teaching requirement, said her experiences have taught her to not take no for an answer.

"I want to tell people that they need to make sure that they should not allow anyone to tell them that they can't do something because only you can determine your future," she said.

Like thousands of other immigrants, Litvinengo moved to the U.S. with her family after her mother won the lottery for a green card. She was 3 when they relocated from Ukraine a few years after the Soviet Union collapsed.

The 27-year-old business owner ventured into pageants when she could no longer play basketball after injuring a foot in high school. She won Miss Connecticut Teen on her first try but had to compete five times to reach the Miss USA competition. Her persistence, Litvinengo said, shows that every effort counts.

"I want to showcase that no matter who you are, no matter what your background is, your size or what you have done in the past, through hard work and discipline, through perseverance and determination, you really can achieve what you put your heart towards."