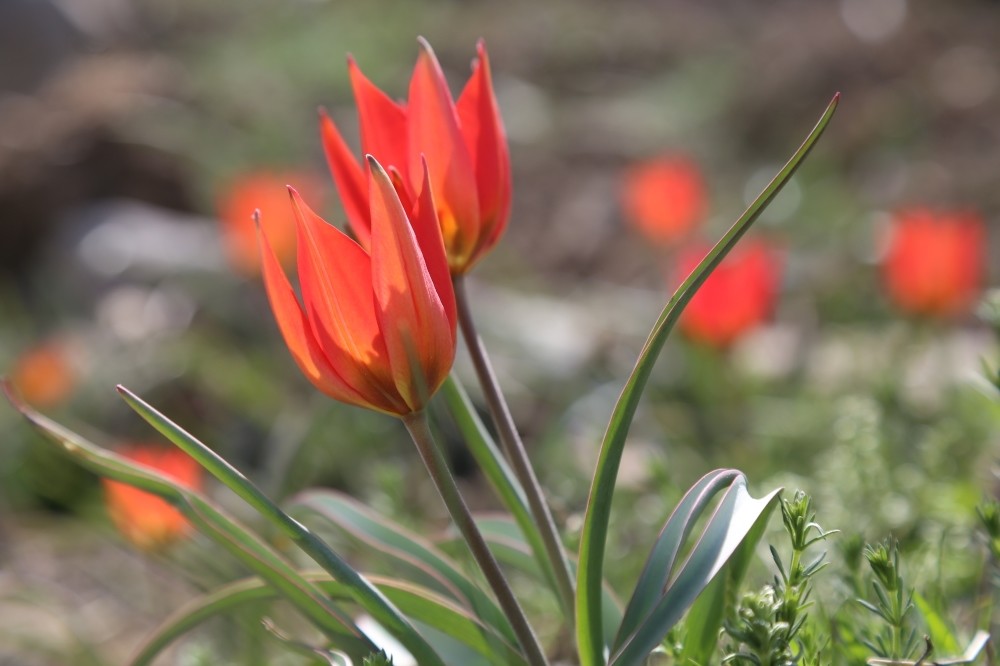 by Anadolu Agency May 16, 2017 12:00 am
The Manisa tulip, a flower native to Turkey, was recently placed under protection to fight against biologic smuggling.

With the help of university students, the Regional Directorate of Nature Conversation and National Parks organized an event at Mount Sipylus National Park where the largest numbers of the tulips thrive.

While speaking to the press, Uğur Bayil, head of the Manisa Regional Directorate of Nature Conversation and National Parks, explained that the natural tulip beds have been fenced-off for their protection and preservation. He also explained that informative signboards have been placed around the area as new educational features for park visitors.

"The Manisa tulip is an important plant species. Some people from abroad or in Turkey uproot the corms and take them. We are taking measures with the support of forest rangers, hunting guards and our field staff to prevent these offences. As a part of the fight against biologic smuggling, a fine of TL 47,479 [$13,315] is now in place to discourage corm uprooting," said Bayil.

While explaining the importance of the Manisa tulip, the head of the Department of Botanics at Manisa Celal Bayar University, Associate Professor Levent Şık, said the tulip's growing areas are now recognized in the Species Act Plan, with special attention being given to the Mount Sipylus National Park area where the flower grows in the greatest numbers.

Touching on the mountain's wide variety of flowers, Şık said: "The Manisa tulip has been an important symbol for the Ottoman Empire and Turks. There are 17 different species of tulips in Turkey, and the this tulip is the most important. Through the observations conducted for the Species Act Plan, it was found that the districts of Demirci and Alaşehir, along with the Yunt Mountains and Mount Sipylus, are the most important areas of growth for this plant. We also think that new species of tulips could be found in Manisa with more research. We would like to turn this tulip, which is important to our culture, into a future source of income."
RELATED TOPICS