Cats the cure to workplace stress in ‘claw-some’ Tokyo office 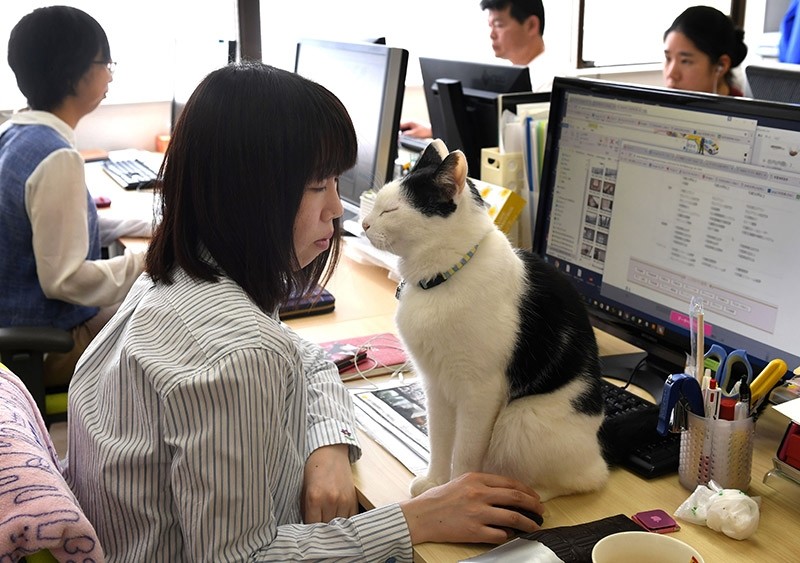 Workaholic Japan is known for long office hours and stressed out employees, but one company claims to have a cure: Cats. AFP Photo
by May 22, 2017 12:00 am

A company in Japan claims to have found the cure for overworked employees, long office hours and workplace stress: Cats.

A total of nine fluffy felines eat, sleep and walk freely in the small office of IT firm Ferray in Tokyo.

Hidenobu Fukuda, who heads the firm, introduced an "office cat" policy in 2000 upon request from one of his employees, allowing staffers to bring their moggies to work.

Other Japanese companies are also allowing animals in the office to help reduce stress and anxiety.

At Oracle Japan, an Old English Sheepdog named Candy works as a "greeting and healing ambassador", according to the company website.

The company said it has had an office dog since 1991, and Candy, the fourth one, now has Twitter and Instagram accounts.

Tokyo is also home to some 60 registered cat cafes, thanks to a growing number of feline lovers.

Eri Ito, who works at Ferray, says she is sold on the animal's soothing ways.

"Cats are sleeping just beside us... It's healing," Ito said.

But there is also a downside to having felines in the office, Fukuda admitted.

"Sometimes a cat will walk on a phone and cut off the call, or they shut down the computers by walking onto the off switch," he said.