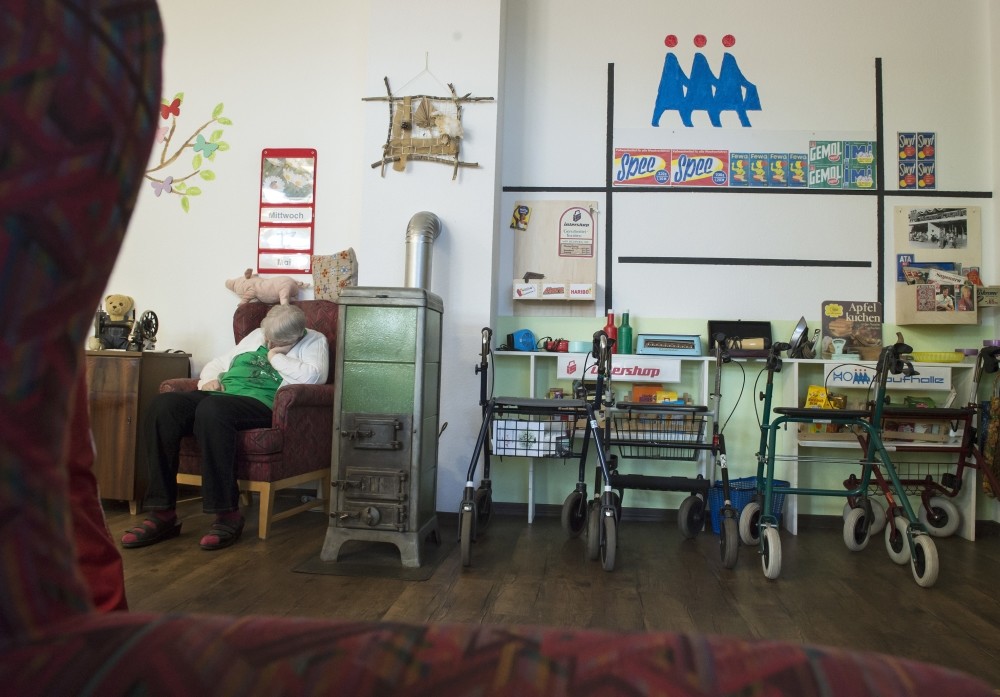 A resident sleeps besides a tiled stove and GDR everyday objects in the Alexa Seniorsu2019 Residence in Dresden, eastern Germany.
by Associated Press Jun 01, 2017 12:00 am

Every weekday morning, white-haired women patiently line up before a door at a Dresden retirement home, step in, and quickly step back nearly six decades into their past in Communist East Germany.

Most of the women - in their late 70s at the youngest - are suffering from severe dementia, but the reminders from bygone days trigger memories and skills once thought lost, and produce surprising levels of happiness and comfort.

They park their walkers next to a Kaufhalle sign from the former East German grocery chain, put on their colorfully-patterned nylon aprons and start the day just like they did some 50 years ago. They chop up bell peppers, tomatoes and sausages for the popular Hungarian salad of their youth, wash dishes in an original 1960s metal sink and iron their laundry with old-fashioned pressing irons while happily humming along to schmaltzy East German tunes coming from a record player. 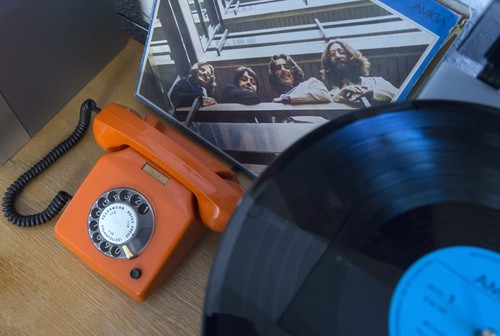 A GDR phone stands besides a Beatles record cover and a record player.

It's hard to imagine that many were - not so long ago - bedridden and unable to eat or use the bathroom on their own, said Gunter Wolfram, the director of the Alexa home in the former East German city of Dresden.

"From the first day on, this room has been a big success story," Wolfram said. "The people are very happy to recognize things from the old times. They immediately feel comfortable."

The 49-year-old, who grew up in East Germany himself, said it was sheer coincidence that he found out that Communist kitsch and other memorabilia brought comfort to some of his 130 residents. The revelation came two years ago when he decided to decorate the home's movie theater with a vintage flashy Troll scooter that was once very popular in East Germany.

"Instead of paying attention to the movie, these people got so excited about the motorcycle. They could all of a sudden remember how to start the ignition, and chatted with bright eyes about outings to the Baltic Sea on their own Trolls a long time ago - it was amazing," Wolfram said.

Inspired by this, he set out to create an entire room in 1960s East German style.

He scoured the region's flea markets and soon had an impressive collection of well-known Ossi - slang for anything and anybody from East Germany, products.

He gathered Spee and Fewa laundry detergents, yellowed magazines and the plastic pepper-and-salt shakers that almost every family in East Germany owned. He also found a wooden wall unit that only the well-to-do could afford at the time. Together with his colleagues, he set up the 1960s room - and the home's residents were so eager to spend time in a place that felt like home they started coming in droves.

Because of the room's success, the waiting list for future residents is full and directors from other retirement homes have called Wolfram, asking for advice.

Soon the demand for the daily trip back into the past had become so popular that Wolfram added a second room, this one designed in East German 1970s style - including psychedelic-patterned curtains, tasseled floor lamps and a bright-orange rotary dial phone.

In West Germany, capitalism ruled and U.S.-style consumerism flourished only a few years after the end of World War II, but materialism was frowned upon in the Communist East and consumer goods were scarce. Since only a few brands were sold in the country's Kaufhalle supermarkets, they have very high recognition value among former East Germans.

Some of the items also feature prominently in the 2003 Golden Globe-nominated German movie "Good-bye Lenin!" in which the son of a woman, who had slipped into a coma before the 1989 fall of the Berlin Wall, desperately tries to re-create the old East Germany after she finally wakes up in a reunited Germany. The boy stacks the home with the famous Spreewald pickles and other products from the DDR - as the German Democratic Republic was called in German - trying to obliterate all signs of capitalism.

Herlind Megges, a gerontologist from Berlin's Charite university hospital who has not been involved in the Alexa home project, said such memory therapy can help improve the capabilities and well-being of dementia patients.

"Memory therapy is often used because it activates exactly what's still there and still working well," Megges said. "It's important for these people, who don't feel well in this world because it doesn't match their current memory, that there's an environment where they feel comfortable."

Objects from earlier phases of a patient's life that are connected to comfortable feelings can lead to physical and cognitive improvement, Megges said. Often patients can still retrieve memories from their childhood and early adulthood even when their short-term memory fails.

Millions of elderly around the world suffer from Alzheimer's and other forms of dementia in which they lose their ability to respond to their environment. While there's no cure yet, research institutions worldwide are trying to find better ways to treat the disease, delay its onset and improve the quality of life for dementia patients.

"We're treating the symptoms, we currently cannot treat the causes of the disease," Megges said.

For Gerda Noack, a 92-year-old retired hat maker born and raised in Dresden, the yesteryear room has been a blessing.

The elegant Noack, who always wears a carefully knotted silk scarf around her neck, used to roam the hallways of the retirement home all day, says Wolfram. She was restless and frustrated, always looking for something she thought she had lost - until she started visiting the 1960s DDR room.

While standing in the room's kitchen last week, she peacefully stirred the chopped-up peppers in an old frying pan, then later cleaned up dishes with an expression of contentment. Asked if she was happy, she nodded cheerfully, waiting for the nurses to dish up the Hungarian salad she had helped to prepare.

"These old, routine activities in the company of other women in a familiar environment really make our residents much more at ease with themselves," said Wolfram. "It's almost become like a job for them, where they spend the entire week here with a whole new sense of purpose."