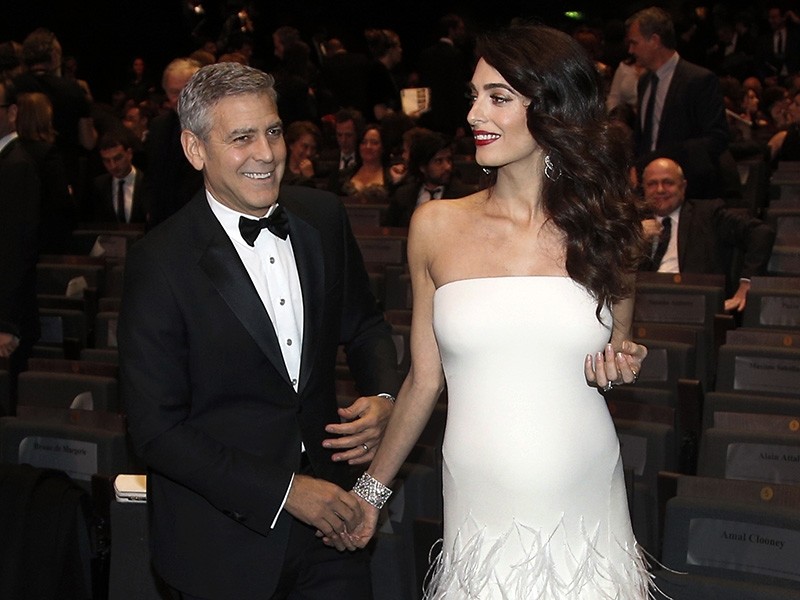 Never known to do things by halves, George and Amal Clooney, one of the most glamorous power couples in the world, announced on Tuesday they had become parents at last, to twins.

"This morning Amal and George welcomed Ella and Alexander Clooney into their lives," said a publicist for the 56-year-old star of "Gravity" and "Ocean's 11."

"Ella, Alexander and Amal are all healthy, happy and doing fine," added publicist Stan Rosenfield, joking that "George is sedated and should recover in a few days."

Amal's parents, who are Lebanese, told reporters they were elated by the news and that everything had gone smoothly.

"We are over the moon," said Amal's mother Baria, speaking from London where she was in hospital with her daughter. "It was a beautiful delivery. The babies are beautiful and are doing well."

Amal's father Ramzi Alamuddin, reached in Beirut, said he had spoken with his daughter and son-in-law after the twins' birth and hoped to travel to London soon to meet them.

"They are in great health, all is perfect. I am very happy for them," he said, predicting the couple "will be great parents."

Oscar-winner Clooney was once one of Hollywood's hottest bachelors before falling for the stunning 39-year-old Lebanese-British human rights barrister. They married in 2014 in Venice, in a lavish wedding attended by A-listers and closely covered by media outlets from around the globe.

News of the twins' birth set social media abuzz on Tuesday with many commenting on the classic names picked for the baby boy and girl.

"I usually eschew celebrity news, but George and Amal Clooney having twins (boy & girl) seems like good news for humanity on some tiny level," another twitter user noted.

Amal was born in Lebanon before her family moved to Britain when she was three years old.

After her wedding to Clooney, she threw her legal clout and celebrity behind a series of high-profile causes including Britain's possible restitution of the Elgin Marbles to Greece.

She has also defended the cause of young Yazidi women who were abused by fighters of the Daesh terrorist group.

She defended Al-Jazeera reporter Mohamed Fahmy after he was jailed in Egypt and was part of the legal team for former Maldives President Mohamed Nasheed following his toppling in 2012.

Actor, director and producer George was married to actress Talia Balsam from 1989 to 1993, before his role in hit television series "ER" propelled him to international stardom.

He first met Amal in Italy in 2013 through a mutual friend and admitted to chasing her for months before she agreed to a date.

"From the minute we met, we just sort of felt like we were going to be together," he once told talk show host Ellen DeGeneres.

He said he popped the question six months after the pair started dating.

The silver-haired actor has won a slew of top awards including an Oscar for best supporting actor in "Syriana" in 2006 and a 2013 best picture award as producer for "Argo."

He also garnered Golden Globes as best actor in the Coen Brothers' "O' Brother Where Art Thou" in 2001 and Alexander Payne's "The Descendants" in 2012.