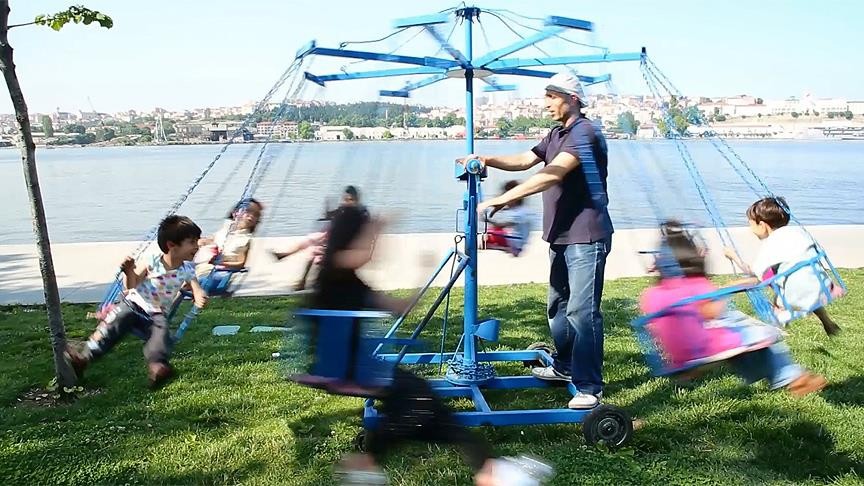 Atuu011f has been providing mobile swinging entertainment to children in the streets of Istanbul for years, and his Ramadan shift continues to bring joy to many.
by Anadolu Agency Jun 13, 2017 12:00 am

Mobile swing carousel owner, Mehmet Halit Atuğ, has been providing mobile swinging entertainment to the children in the streets of Istanbul for years, and his Ramadan shift continues to bring joy to many.

Noting that he started touring the streets with his father when was 7 years old, by the age of 12 his father thought Atuğ was ready to be on his own and handed down the mobile carousel to him.

Though Atuğ was born in Mardin, his family migrated to Istanbul and he took over the business from his father at a very early age. At first, his father would come along and watch to be sure he could manage the swing carousel alone. After a while, Atuğ was on his own to bring fun to children. He stated that through the years he toured almost all of the districts of Istanbul, and the children who once enjoyed his swing carousel have all started their own families and now bring their own children to enjoy the carousel ride.

Often, children who could not afford carnivals used to line up for the swing carousel as soon as he rounded the street corner. Atuğ said the kids all knew him and sometimes would form lines before he even reached their street. "This made me happy and motivated me to work harder," said Atuğ. Occasionally, he comes across one of the children, now grown, that used to enjoy his rides. Nowadays, the adults bring their own children for a spin. "I tell them I raised them, which is not a lie. I was with children every day and watched them turn into adults," added Atuğ.

When he realized that most children couldn't memorize his name, he came up with a nickname that would stick in the children's memories, "Şaban," the famous movie character played by Kemal Sunal. He then became, "Şaban brother of children."

One day, his father's "antique swing carousel that he had invented 30 years ago" was stolen, which upset everyone in the family. When they couldn't find it, his dad crafted another one.

Using the same swing carousel for the past 20 years, Atuğ sees it as his breadwinner, motherland and almost like a second mother and father by providing him a steady livelihood. "I don't have much else, and this is my workplace. But I believe as long as we do an honest job, we will receive the help of God," said Atuğ.

He stated that while fasting during the month of Ramadan, it is a pretty hard job. "I get thirsty, the slopes are especially tiring, yet I know I have to continue this good deed during this holy month," noted Atuğ.